Instability begets instability. At least, that’s the lesson learned from a couple of Caltech researchers studying the way magnetic field... 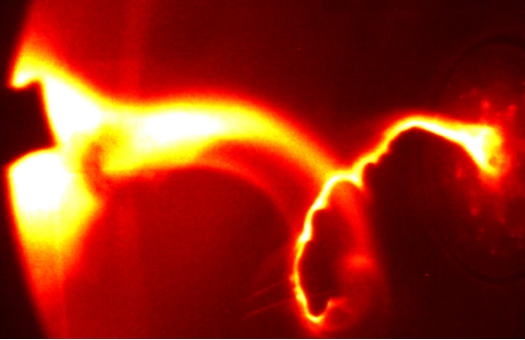 There’s a ton of cool science behind this video that won’t be expounded upon in detail here, but suffice it to say that the researchers decided the best way to observe the corkscrewing effect that occurs when plasmas shed their electrons, creating a magnetic field that then acts on the plasma (this phenomenon is known as kink instability) was to fire some jets of super-hot, 20,000-degrees-Kelvin plasmas across a 20 centimeter gap in a vacuum and film it with a microsecond camera. In doing so, they discovered that kink instability actually spawns another phenomenon called Rayleigh-Taylor instability.

That’s two instabilities for the price of one jet of superhot argon plasma, which is what you’re looking at in the video below. Click through to Caltech to see just how kinky this plasma phenomena can be.