The high data loads of the future–and even the present–require that optical communications platforms continue to get faster, leaner, and... 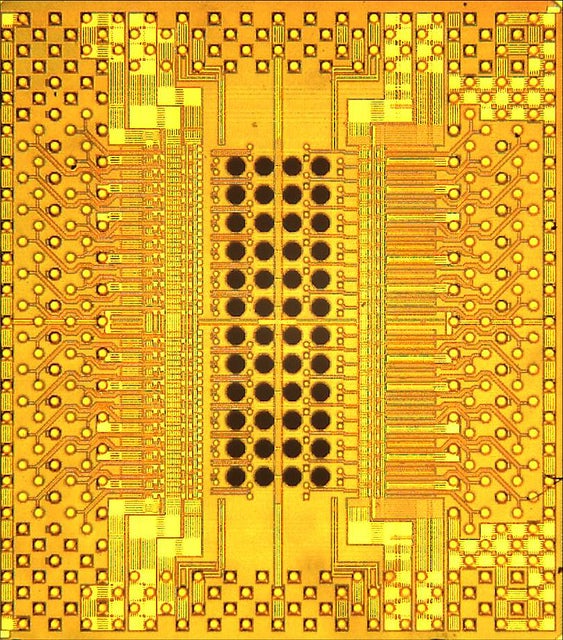 The high data loads of the future–and even the present–require that optical communications platforms continue to get faster, leaner, and cheaper. At the Optical Fiber Communication Conference in Los Angeles today, IBM will report on a prototype optical chip it has developed that has hit a significant milestone in optical data transfer: one terabit–that’s one trillion bits–per second.

That’s like downloading 500 HD movies at once, a speed matching the bandwidth consumed by 100,000 users at today’s average high-speed Web rates. It’s important to note that this a parallel optics chip technology, not a long-range fiber optic serial communications technology, so it’s not going to instantaneously boost the speed at which data traverses the oceans. But between computers on a local network (between different servers in a data center, for instance) this technology could provide some pretty searing speeds.

The chip itself gets its name from the fact that there are 48 tiny holes bored through a standard silicon CMOS chip that connects on the back side with 24 receiver and 24 transmitter channels. These channels allow a whole lot of data to move through the chip in both directions simultaneously, allowing for these terabit-per-second transfer speeds.

What’s more, in proper IBM fashion the chip isn’t some kind of behind-the-glass prototype never destined for commercial production. The company claims it achieves these record data speeds with excellent power efficiency–that a 100-watt light bulb could power 20 of the optical modules. They are also constructed from off-the-shelf, commercially available components. But there’s no word yet on when, exactly, this manufacturer-friendly optical device might begin taking advantage of those economies of scale and deliver the next-generation of cloud computing and data center technologies.