Paint Your Roof With Working Solar Cells Made from Grass Clippings

Installing a solar roof on your home could one day be as simple as mixing your yard clippings into a... 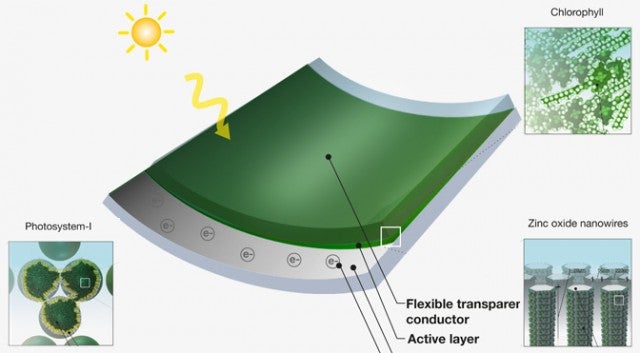 Installing a solar roof on your home could one day be as simple as mixing your yard clippings into a stew of inexpensive chemicals and painting the resulting mixture right onto your rooftop. An MIT researcher has developed a method of manufacturing solar panels on the spot from agricultural waste, sidestepping the need for silicon and making ready-to-mix solar cheap and abundant virtually anywhere.

But first things first. What MIT’s Andreas Mershin has done here is pretty interesting. His chemical cocktail extracts the photosynthesizing molecules from plant matter–including chlorophyll–and stabilizes them such that they can be spread on a glass substrate. Said substrate is coated in nanowires and titanium dioxide “sponges” that help convert photons to electrons and then ferry those electrons away as current.

But you were waiting for the other shoe to drop, and now it shall: the conversion efficiency of Mershin’s paintable solar panel is just one-tenth of one percent. To even begin to make an impact, a solar panel needs an efficiency many, many times greater than that. But it’s a starting place, and to sweeten the deal the technology is cheap. Mershin hopes now that he’s put the technology in play, he or others will be able to build on it. More over at ExtremeTech.