The annual Ig Nobel award ceremony is one of, if not our absolute favorite awards shows of the year. For... 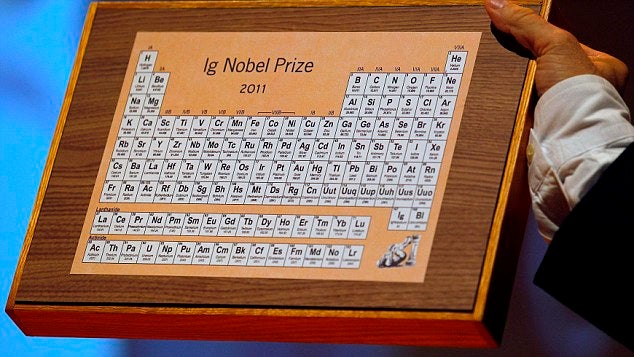 A 2011 Ig Nobel Prize is shown during the 21st annual Ig Nobel prize ceremony at Harvard University in Cambridge, Massachusetts September 29, 2011. The annual prizes, meant to entertain and encourage scientific research, are awarded by the Journal of Improbable Research as a whimsical counterpart to the Nobel Prizes, which will be announced next week. REUTERS/Adam Hunger (UNITED STATES - Tags: EDUCATION SOCIETY SCIENCE TECHNOLOGY). ADAM HUNGER
SHARE

The annual Ig Nobel award ceremony is one of, if not our absolute favorite awards shows of the year. For those who don’t know, it awards prizes to serious scientific studies about, well, offbeat things. This year’s crop of winners include the inventors of a wasabi alarm clock, a study that shows we make better decisions when we have to pee, and the discovery of a beetle that likes to mate with a certain brand of Australian beer bottle.

The awards cover physiology, chemistry, medicine, psychology, literature, biology, physics, mathematics, peace, and public safety, just like the real Nobel Awards, and the ceremony (held at Harvard University) is presided over by real Nobel winners. This year brings an interesting twist, in that the mathematics prize was awarded to non-scientists; specifically, it was awarded to the folks who vehemently predicted the end of the world, due to spurious mathematics, from Pat Robertson to Harold Camping. That particular prize is curiously dominated by Americans (U-S-A! U-S-A!).

Read more about the winners at the Improbable Research site.