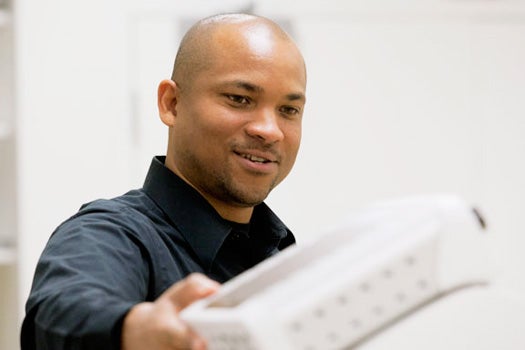 As an Atari-addicted kid, all Chad Jenkins wanted was to someday become a videogame designer. But once he got to grad school, he switched his obsession to robots.

Jenkins, now at Brown University, aims to program robots so that they learn the way children do: through mimicry andrepetition. To teach his first virtual humanoid robot how to do the Cabbage Patch, he programmed it to study his moves and replicate them. Now he’s turned his attention to more-complex tasks, such as setting a table or preparing a meal. The key is repetition. The more a robot observes, and the greater the variety of approaches to a given task that it observes, the better it will be able to understand the underlying essence of the act itself.

Such teaching takes a lot of repetition. rather than do all the dancing or table-setting himself, though, Jenkins has figured out a way to crowdsource the work. Prescreened users will log on to his Brown lab’s website and, through simple keystrokes, guide a robot—such as the PR2, a humanoid robot made by the Silicon Valley company Willow Garage—through a job. Instead of observing the person, the robot will learn by observing itself, recording its every movement and action, and using learning algorithms to find the most efficient way to complete a task. eventually, after someone demonstrates to the PR2 how to successfully pick up and set down a wineglass, the robot should be able to master it.

Jenkins’s training lab will also be testing new applications and tasks for the robots. Most robots run on specialized code, but Jenkins made his robots run on a common Web language so that more developers would be able to program them. “He’s democratizing access to robots,” says Willow Garage roboticist Brian Gerkey. Although Jenkins isn’t sure what applications the geek masses will devise, the father of three does have a task in mind for his own house: “I’d love for a robot to sort the toys and put them away.”