Video: A Robot That Conducts Its Own Research 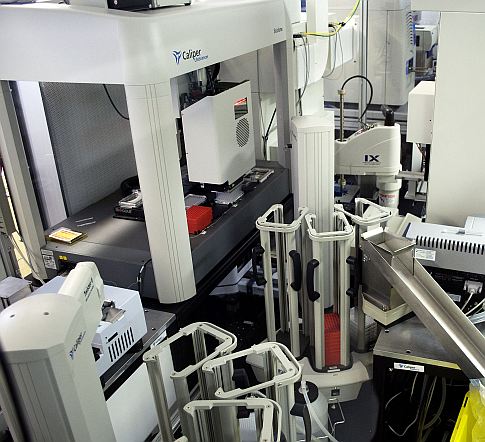 I’ve always said that most of what I did as a biology research technician would someday be carried out by a robot or well-trained monkey. Most lab work involves tasks just begging for a robotic hand: repetitive, technical, and exceptionally boring. Some (very well-funded) labs have robots that can perform repetitive physical jobs, like screening gazillions of chemicals for ones that will be medically useful.

But this new robot can do the fun part of science, too — the thinking. Meet Adam, the first robot that has independently brought a little nugget of experimental knowledge to the world. Adam thought up a hypothesis, tested in the real world, analyzed the data, and then, of course, did it all over again, many, many times.

Adam studied the genetics of yeast, a lab favorite. The paper detailing Adam’s (and his programmers’) success was published today in Science.

The journal also features a separate article about a computer program without any previous physics knowledge that was able to derive physics laws, such as the conservation of momentum, when fed observational data from pendulums.

What do you think? Will the future lab be one scientist overlord and a bunch of robot slaves? How far do you think this can go? What can humans do that robots can’t?

Snooze warning: This video of Adam going about his daily lab tasks is boring, but it might give you a little more sympathy for the scientists of the world who aren’t lucky enough to have science-bots at their side.