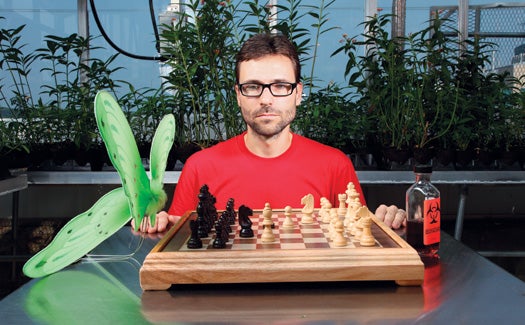 “I didn’t start working with monarchs because I liked them,” says evolutionary biologist Jaap de Roode of Emory University. “I came to them because they have a really cool parasite.” That parasite, called Ophryocystis elektroscirrha, normally pokes holes in the butterflies’ skin, causing them to leak bodily fluids. But de Roode noticed that monarchs that ate the tropical milkweed plant did not suffer from parasitic infections as much as monarchs eating swamp milkweed did. This led him to suggest to his colleagues that the monarchs were self-medicating. “One of my reviewers said, ‘That’s completely ridiculous. There’s absolutely no way they could ever do that,'” de Roode recalls. Up until then, self-medication was seen as a complex cultural trait. Only a few animals, such as chimps and elephants, had been observed using medicine.

To test his hypothesis, first de Roode looked to see if infected larvae prefer to munch on the parasite-killing tropical milkweed species, rather than the swamp milkweed. They didn’t, so he concluded that the larvae do not use the tropical milkweed medicinally. But when he compared the behavior of healthy adult females with the behavior of infected adult females, a difference quickly became apparent. Infected females, which transmit the parasite to their offspring when they spawn, preferred to lay eggs on the tropical milkweed, showing that they can preemptively medicate their offspring. “Somehow, the mother knows what’s best,” de Roode says.

His findings challenge the view that only animals with cognitive complexity use medicine. If butterflies, which have a simple nervous system and no social structure, could preferentially use medicine, perhaps self-medication is pervasive in the animal kingdom and scientists just haven’t had the chance to find it yet.