A new broad-spectrum treatment for viruses could be as effective as antibiotics fighting bacteria, MIT researchers report. The method uses... 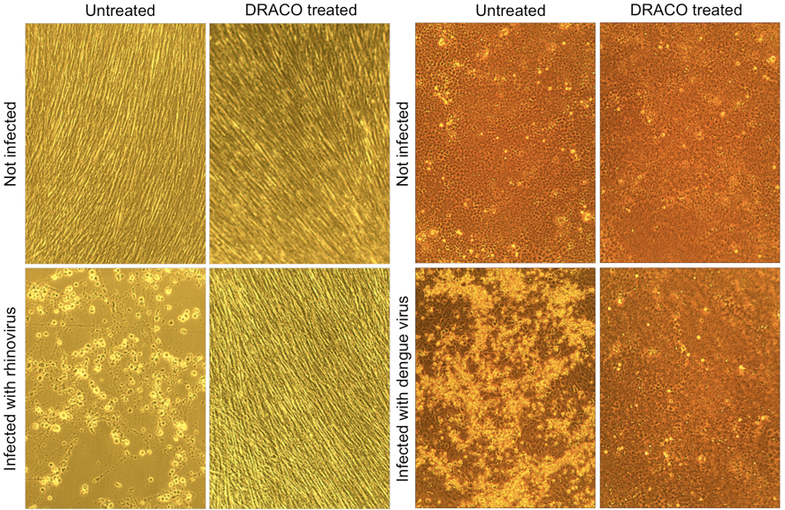 A new broad-spectrum treatment for viruses could be as effective as antibiotics fighting bacteria, MIT researchers report. The method uses cells’ own defense systems to induce invaded cells to commit suicide, preventing the spread of the virus. In lab tests, the new drug completely cured mice that had been infected with influenza.

Viruses work by inserting themselves into a cell and hijacking its machinery for its own use. The invaded cell then creates more copies of the virus, which involves creating long strings of double-stranded RNA — which contains the virus’ genetic material, like DNA contains ours.

When the virus is done copying itself, its hostage cell usually dies, from the virus bursting through its walls (lysis), changes to the cell’s outer membrane, and from apoptosis, or programmed cell death.

Human cells have plenty of defenses against viral invasion, including proteins that attach to the double-stranded RNA, preventing the virus from replicating itself after successful invasion.

When one end of the DRACO binds to dsRNA, it signals the other end of the DRACO to induce cell suicide, an MIT News article explains. In this way, the cell is killed before the virus can take over and eventually kill it anyway. If there is no dsRNA, the healthy cells are left alone.

“In theory, it should work against all viruses,” said Todd Rider, a senior staff scientist at MIT’s Lincoln Laboratory who invented the new technology.

A handful of drugs can target specific viruses by interfering with their replication process, through addition of modified DNA building blocks or the blocking of enzymes the viruses need to stimulate the replication process. But viruses are wily bugs, and they can evolve to resist these treatments.

The DRACO therapy could be effective because it targets the host cell, not just the virus.

Rider and colleagues are testing DRACO against more viruses in mice, according to MIT. Rider hopes to license the technology for trials in larger animals and for eventual human clinical trials, too.