This month in amazing medical procedures, it’s all about Europe. Last week we learned that a pan-European team of researchers... 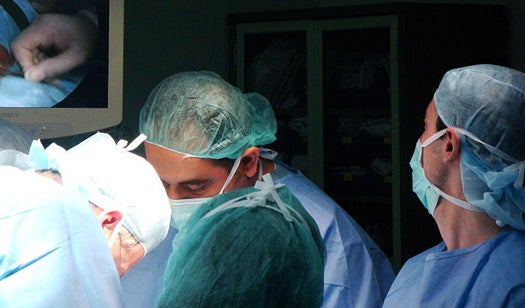 This month in amazing medical procedures, it’s all about Europe. Last week we learned that a pan-European team of researchers and doctors have successfully pulled off the first transplant of a synthetic organ grown from the patient’s own stem cells. This week, the world’s first double leg transplant was successfully executed in Spain.

The male patient has not yet been identified, but the 13-hour surgery that involved painstakingly reattaching each of his nerves and blood vessels to those in his new legs has been deemed a success. The patient is awake and reportedly quite pleased with his new biological hardware, though it will take a good deal of immunotherapy to ensure his body doesn’t reject the new limbs, and another several months before he can be expected to gain any feeling in the transplanted extremities.

Leg amputees usually aren’t good candidates for limb transplants because there are very good prostheses available and the procedure is quite difficult. In this case, the patient had lost his legs in an accident, and the amputation had occurred so high on the thigh as to rule out attaching prosthetic limbs. With no alternative, doctors green lit the procedure. They hope to have the patient moving his knees in a few weeks, and perhaps have him walking in physical therapy within six months.