Researchers in Cleveland have built an artificial lung that is so efficient it can breathe regular air rather than the... 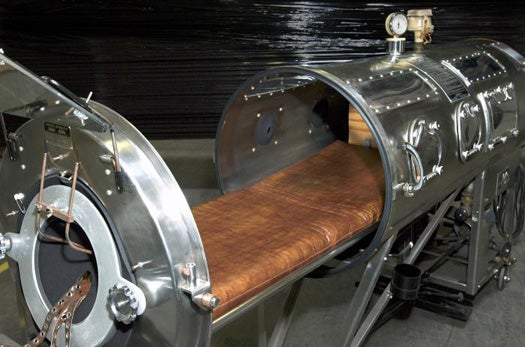 Researchers in Cleveland have built an artificial lung that is so efficient it can breathe regular air rather than the pure oxygen required by current artificial lungs. The technology makes possible the idea of a man-made lung that is far more portable–and possibly implantable–for the nearly 200 million people suffering from some degree of lung disease.

Current artificial lungs are inefficient and cumbersome, requiring large tanks of oxygen–their oxygen exchange efficiency is so poor that they can only breathe the pure stuff–that render them more or less stationary. The reliance on pure oxygen also limits their lifespans, as they need a fresh supply every few days.

The new lung, built by Case Western Reserve University researchers, is modeled on the natural human lung and contains a bunch of breathable silicone rubber analogs of blood vessels that branch out like real blood vessels down to the point that they reach a diameter smaller than one quarter that of a human hair. This bio-mimicking miniaturization offers a much better surface-area-to-volume ratio, lending the device its higher oxygen exchange efficiency.

As such, the researchers believe they can pack enough efficiency to match that of the human lung in a package that is also roughly the size of a real lung–meaning that at some point in the future their lung could be implanted in patients. In such a scenario, the device could be driven by the heart, requiring no independent power source to power the lung.

Tests using pig blood have shown that the artificial lung is three to five times more efficient than the current state of the art, and though the initial goal was to improve efficiency and portability of artificial lungs–that is, to get rid of those external oxygen tanks–the team thinks they could have an implantable model in clinical trials within a decade. That is, of course, if we’re not already growing made-to-order replacement lungs in the lab by then.