Surfing big breakers is cool and all, but wouldn’t catching lazy rollers be more fun at speeds topping Mach One?... 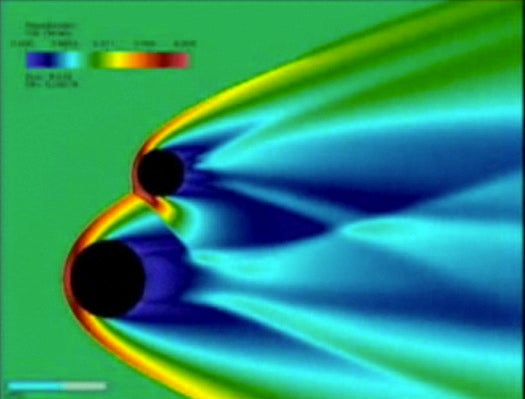 Surfing big breakers is cool and all, but wouldn’t catching lazy rollers be more fun at speeds topping Mach One? A CalTech researcher and a few colleagues put together a few videos showing that it is indeed possible to shred shock waves. Well, in theory anyhow. Using nylon balls, one larger than the other, the researchers demonstrated how one object can ride on the shock waves given off by another.

The research, presented by CalTech’s Nick Parziales and a few friends, was conducted in a supersonic wind tunnel that blasted the balls with air moving at Mach Four (that’s more than 3,000 miles per hour). As you can see, the balls start the experiment touching but soon separate as the smaller ball begins to precisely follow the shock wave created by the larger ball.

It’s not the kind of practical science that you can take to the beach, but it does have implications for things that move a lot faster than you do. Shock wave surfing happens when celestial objects moving at supersonic speeds fall apart, as when meteorites break up in the atmosphere. But unless you’re the kind of surfer that’s silver, we suggest you stick to surfing the tides.