A Prototype Greenhouse Demonstrates the Future of Farming on the Moon

A portable, collapsible greenhouse inspired in part by a crop-producing system at a South Pole research station could someday provide... 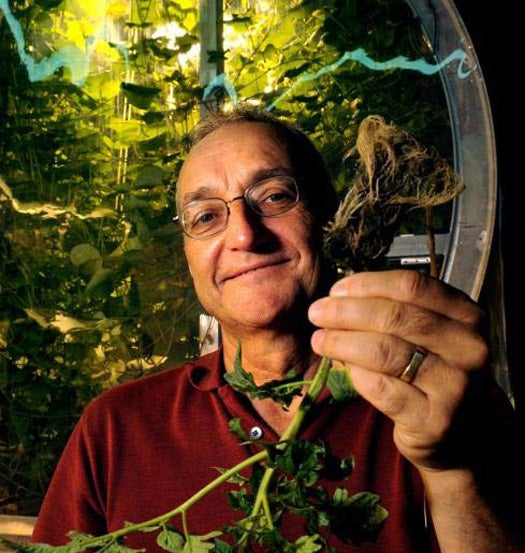 A portable, collapsible greenhouse inspired in part by a crop-producing system at a South Pole research station could someday provide fresh vegetables and other foods in future manned lunar or Martian outposts. Working in conjunction with private industry, the University of Arizona’s Controlled Environment Agriculture Center (CEAC) has set up a demo lunar greenhouse to demonstrate how a hydroponic system could grow peanuts, potatoes, tomatoes and other crops for colonists on other planets.

The 18-foot, membrane-sheathed system collapses into a 4-foot wide disk for easy packing on an interplanetary mission. When extended, it is fitted with water-cooled lamps and seed packets prepped to sprout without soil. They hydroponic system needs little oversight, relying on automated systems and control algorithms to analyze data gathered by embedded sensors that optimize the controlled ecosystem. The whole system takes just ten minutes to set up and produces vegetables within a month.

The design is similar to that of a greenhouse housed at the U.S. South Pole Station in Antarctica, which was built by the same company that is collaborating with the CEAC on the lunar greenhouse. But the lunar greenhouse would possess some interesting technical twists that would make it even more sustainable. Water for the system would be derived from the attending astronauts’ urine, CO2 produced by their breathing, and fiber optics could pipe sunlight into the chamber from outside, dispensing with the need for power for the sodium vapor lamps (ostensibly a future lunar base would be built underground to shield it and its inhabitants from solar weather, cosmic radiation, and small meteorites).

But while designed for use hundreds of thousands of miles away, the technology could also have applications here on the ground. Engineers working on the project think the tech could enhance urban farming techniques, bringing food production out of the fields and into population centers. The emphasis on self-contained, self-sustaining systems in space could also inform efforts to make agriculture as efficient and sustainable as possible.