Goodbye and Thanks to WMAP, the Satellite That Mapped the History of the Universe

The Wilkinson Microwave Anisotropy Probe, or WMAP, has been gathering information about the Big Bang, dark matter, and the nature... 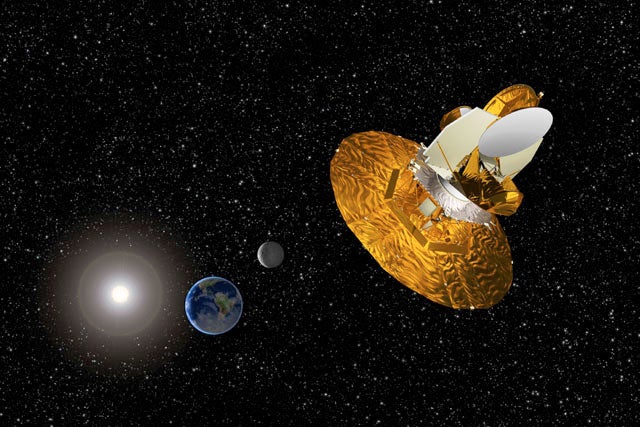 The Wilkinson Microwave Anisotropy Probe, or WMAP, has been gathering information about the Big Bang, dark matter, and the nature of the universe for nine years now, and it’s finally being put to rest (rest being a “parking orbit” around the sun).

WMAP, a joint project of NASA and Princeton University, launched in 2001 with the goal of studying the cosmic microwave background, basically the atoms remaining that began releasing radiation closest to the Big Bang. This data has allowed cosmologists an unprecedented amount of insight into the earliest workings of the universe, enabling them to answer with reasonable certainty such questions as “how old is the universe?”

In fact, WMAP is actually listed in the Guinness Book of World Records for its success in pinpointing the age of the universe more precisely than any other tool in history: 13.75 billion years old, give or take 0.11 billion.

The first WMAP research, released in 2003, managed to prove the quantities of different types of matter in the universe. Says Wired: “By comparing computer models of what hypothetical universes with different compositions should look like to WMAP’s view of the actual universe, the team of cosmologists proved that 73 percent of the universe is made of dark energy, 22.4 percent is dark matter and just 4.6 percent is the regular, visible matter that makes up stars, planets and people.”

WMAP’s studies are immensely popular–the three studies (2003, 2008, January 2010) released by the WMAP team are also the three most highly-cited studies of the past ten years in all of physics and astronomy. The nine-year gathering of data is over, largely due to the weakening of the satellite’s batteries, but there’s still lots to analyze. Another study will come in about two years, and there doesn’t seem to be any doubt that it too will bring fascinating revelations. The team is currently working on figuring out what happened in the first trillionth of a trillionth of a second of the universe’s life.

So thanks and goodbye, WMAP. I hope you enjoy your retirement, orbiting the sun.