When astronauts next land on the moon, they’re likely to whip up a celebratory dinner of freeze-dried macaroni and cheese.... 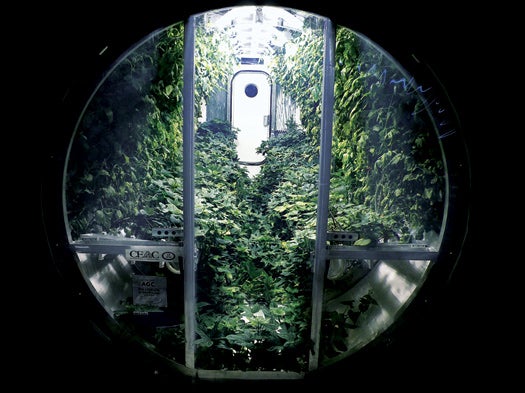 When astronauts next land on the moon, they’re likely to whip up a celebratory dinner of freeze-dried macaroni and cheese. But a new self-building greenhouse could supplement that meal with a fresh salad to eat and oxygen to breathe.

The greenhouse, constructed at the University of Arizona, is a plant-based life-support system. A capsule on the moon would pop open, like a camping tent, into four 18-foot-long, seven-foot-wide cylindrical greenhouses, each packed with seeds, sodium-vapor lights and everything else needed to grow a garden. A rover would bury the greenhouse in lunar soil to protect the plants from cosmic rays.

On the moon, the hydroponic farms could use a few hundred gallons of plant food to grow more than 800 pounds of vegetation in a few months. Carbon-dioxide-rich air from astronauts’ living quarters would be pumped into the greenhouse to support photosynthesis, keeping the system self-sustainable. In September the researchers completed a NASA-funded eight-month test run of an 18-by-7-foot collapsible prototype that produced enough harvestable sweet potatoes, lettuce, tomatoes and strawberries each day to meet half the caloric requirements of one person.

The team hopes to secure a second NASA award this winter to scale up to support four people and design a system to recycle vegetation and sewage into fertilizer. They also need to determine how to time plantings to keep oxygen flowing. Says Gene Giacomelli, a project coleader, “You don’t want to enjoy your dinner tonight and run out of oxygen tomorrow.”