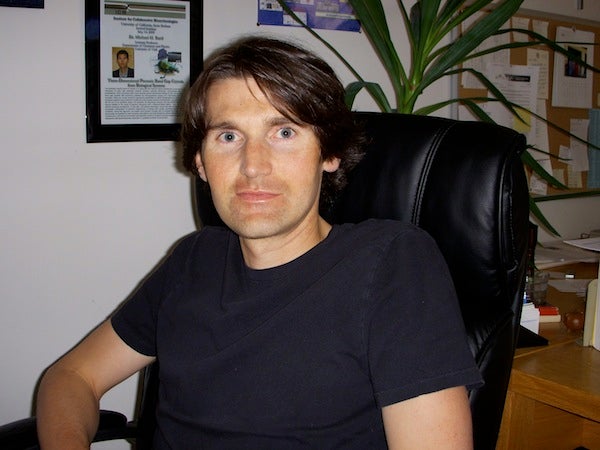 Michael Bartl’s office is overrun with dead beetles. They’re not the remains of an infestation. The green corpses of Lamprocyphus augustus, native to Brazil, led Bartl to one of the most sought-after crystals in optical science.

Since the late 1980s, physicists have dreamed of building a so-called ideal photonic crystal, a diamond-shaped repeating nanostructure they could use to manipulate the behavior of light. Scientists have only been able to make one that controls infrared light. Crystals that use visible light instead could make solar cells more efficient by capturing additional photons or could make for more-powerful lasers by better amplifying light. And since light travels more quickly than electrons, such crystals could someday enable the first ultrafast, light-based computers. Sounds great, right? But no one has been able to make diamond-based crystals composed of patterns small enough to interact with visible light’s short wavelengths.

One day in 2006, as Bartl was trying—and failing—to synthesize a photonic crystal in his lab, he got an e-mail from a local high-school student who had looked him up online and hoped to use his scanning light microscope for her science-fair project, a study of the nanoscale structure of beetle shells. When she showed him L. augustus, he saw immediately that its scales were exactly the same color from every angle, a sign that they were manipulating visible light from all angles. That moment changed his career. He dropped everything to study the insect’s scales, assembling images of thin slices to make a digital 3-D image of the structure. “That’s when we discovered the beetles make a diamond-shaped photonic crystal,” he says— one that manipulates visible light.

Using a replica of the beetle’s scales, Bartl is now working to build a diamond nanostructure using molecular self-assembly so that it can be easily mass-produced in a suitable material. Bartl, a calm and soft-spoken Austrian, is the sort that seeks out difficult challenges. (He’s an avid runner. In 2004 a half- marathon in Santa Barbara involved a climb of nearly 4,000 feet, and a 1999 race took him up an Austrian mountain.) He just didn’t expect he would be using nature to meet them. He thinks the insect world may hold the key to other breakthroughs, so he is studying the scales of other types of exotic beetles. “The more you look at these biological structures,” he says, “the more you find out how amazing they are.”