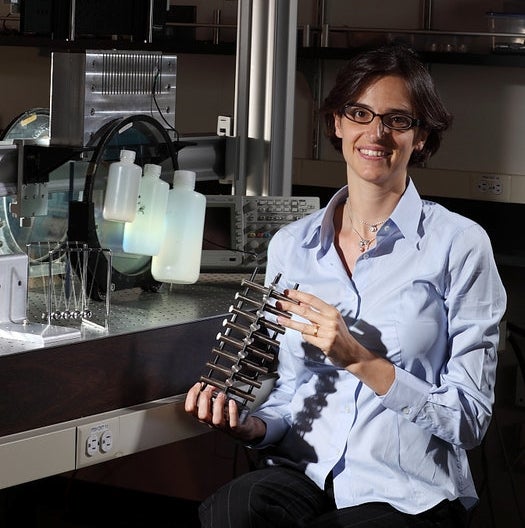 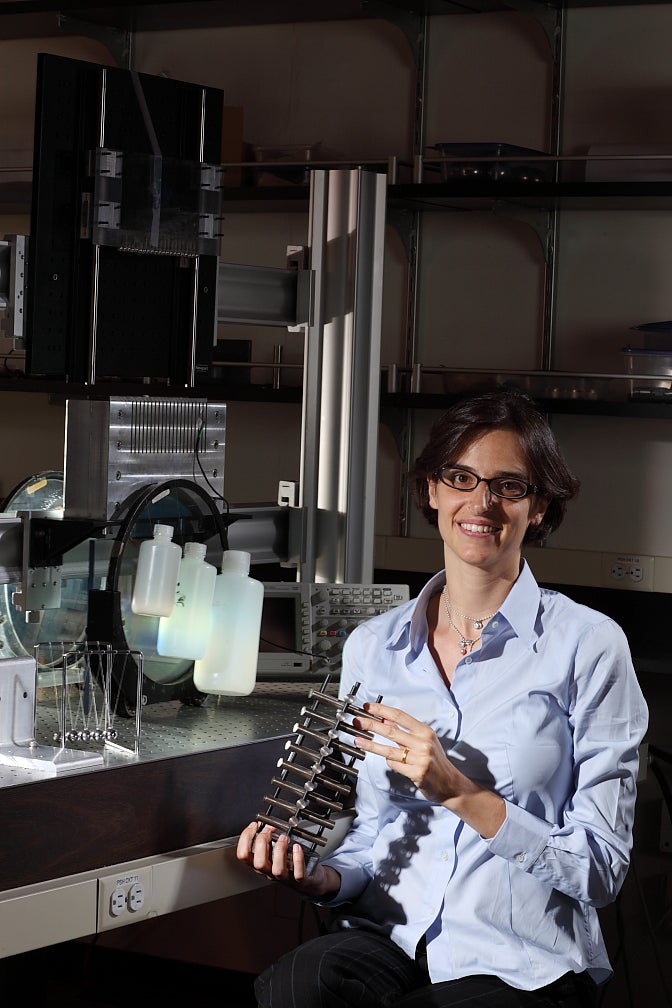 Chiara Daraio loves the pick and roll. As a former member of Italy’s junior national basketball team, she knows that although the effect of the play is complex and devastating, its parts are simple. It goes like this: Daraio blocks a defender’s path, her teammate darts past, Daraio rotates away from the pursuing defender and waits, unguarded, for her teammate’s quick pass and an open shot. Pick. Roll. Pass. Shoot. It’s a straightforward process with a sophisticated result.

Daraio, an applied physicist, still prefers the basics. She studies the elastic properties of nanofibers to develop impact-absorbing foams. She identifies ancient rocks by analyzing their carbon deposits. And she based her nonlinear acoustic lens, a device that fires “sound bullets,” on the principles of a simple toy.

The lens works like Newton’s cradle, the click-clack desktop toy that demonstrates the law of conservation of momentum. Swing one ball into the others, and energy transfers neatly from one ball to the next, until the last ball swings away. Daraio’s lens consists of 21 parallel rows of 21 solid-steel pinball-size balls. A hammer strikes the rows at one end of the array. That impact generates impulses that travel through each row in a wave. When the wave emerges from the last row, it spreads through the air like a ripple through a pond.

Daraio builds her sound bullets by focusing these waves into a defined point in space by squeezing the balls in the outer rows together more tightly. Each wave’s energy is relatively low, but when they combine, the total energy is amplified many times over. “If we could train that point on, say, a tumor, we might be able to break it up while sparing more of the tissue around it than with today’s techniques,” she explains. She says bouncing the waves off organs–or airplane fuselages–could also create high-resolution images of structural imperfections. The jump from current ultrasound imaging to what the lens could provide would be like going from black-and-white to high-definition television.

Daraio has fired the bullets into a hard polymer to map where in space their force converges. Next she’ll test her nonlinear acoustic lens in water and, perhaps someday, on human tissue. But first the lens needs upgrades. She would like to replace the balls with other mediums whose focus point is easier to calibrate. Calibrate. Strike. Focus. “If you try to think simply,” she says, “it’s generally going to work.”