Asteroids and comets come in all shapes and sizes—from small pebbles, to larger SUV-sized fragments, to massive asteroids like Ceres,... 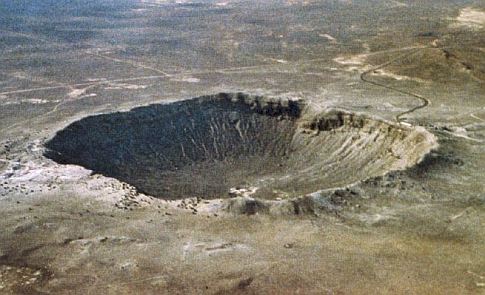 Asteroids and comets come in all shapes and sizes—from small pebbles, to larger SUV-sized fragments, to massive asteroids like Ceres, which has a diameter of about 621 miles. Much of the asteroid material that crosses paths with the Earth burns up when it enters the atmosphere. About once every 100 years, though, a fairly large asteroid strikes the Earth.

But how big does an asteroid need to be to cause major destruction? The new “Impact: Earth!” asteroid impact effects calculator will help you find out. The interactive web tool, developed by a Purdue University research team led by Jay Melosh, allows anyone to calculate the potential damage caused by a comet or asteroid striking the Earth. Users input information into several parameter fields, such as the diameter and density of the object, its angle of entry, and the location where it will hit. The calculator then estimates the impact consequences, providing information about debris distribution, ground shaking, size of the resulting crater, and whether a tsunami will be generated.

About 50,000 years ago, an asteroid about 164 feet in diameter scooped out the famous Barringer Crater (Meteor Crater) in northern Arizona. The new calculator estimates that if an asteroid twice as large as that one struck about 20 miles outside Chicago, it would generate impact energy equal to about 97 megatons of TNT—igniting a fireball with a 1-mile radius and triggering a magnitude-6 earthquake about six seconds after the impact.

The largest known impact threat in Earth’s near future is the asteroid Apophis, which scientists say has a small chance of striking the planet in 2036. The new calculator will tell you what will happen if Apophis falls in your backyard, Melosh says.

“Impact: Earth” is an update of an earlier impacts calculator that Melosh created with colleagues at the University of Arizona. The new user-friendly version includes more visual components, as well as calculations of tsunamis that would result from ocean impacts. Melosh is also a science team member on NASA’s EPOXI mission, which flew to within 435 miles of the comet Hartley 2 yesterday.