Where International Standard Units Come From, Part Four: The Mole

All this week, the origin and continued preservation of five of our favorite standard units of measure 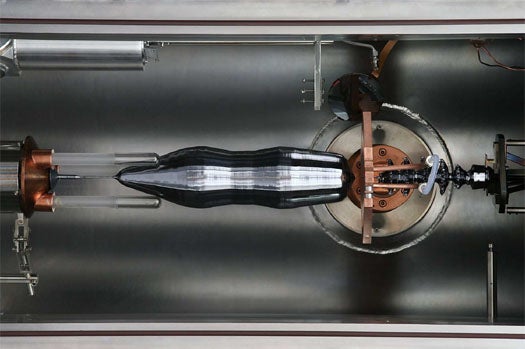 We all have an intuitive idea of what a meter or a second is, and even a candela seems pretty straightforward. The mole is different, probably the hardest metric standard to grasp at first.

My high school teacher had a Velcro rodent she would dismember to help us visualize it—a “mole” that detached in different places and could be stuck back together to illustrate a half a mole, a quarter of a mole, or whatever. I’m not sure it helped.

Basically, a mole measures the amount of a substance, but measures it in a clever way. Let’s say you wanted to manufacture calcium sulfide, CaS, and you worked in a very competitive industry where you couldn’t waste any calcium or sulfur. That means you need the exact same amount of each to mix together. But defining amount gets tricky here, because a sulfur atom has fewer neutrons and protons and therefore weighs less than a calcium atom. So if you have ten kilos of both, you actually have far more sulfur atoms than you need. The mole solves this problem: It provides a way to convert from kilograms (or whatever) into the amount of X that will react with Y. In this case, you’d want to mix one mole of each element to get a perfect yield.

The international definition of a mole has been based on common elements like oxygen and hydrogen in the past, but ever since 1960, scientists have defined one mole as exactly the number of atoms in 12.0000… grams of carbon-12. But really, this definition papers over some predicaments—it fudges things.

You might remember a number, Avogadro’s number, associated with a mole—a mole always has 6.022141793… x 1023 particles of whatever. That’s an absolutely ginormous number. Counting one atom per second, with thirty million or so seconds in your average year, it would take twenty million billion years to count that high, over a million times the age of the universe. So while you might know you have exactly one mole of carbon twelve, you only have a vague idea of how many atoms that is: Because after the ellipsis in 6.022141793…, it’s anyone’s guess—and there are a lot of decimal places to go.

What’s more, if you’ve had a sneaking suspicion this whole time that the mole sounds a little redundant—since the “amount of a substance” is an awful lot like the “mass of a substance”—you’re onto something. In fact, issues related to enumerating atoms have led to even bigger problems with defining the last standard we’ll look at, the kilogram.

Tune in tomorrow for the final installment of our exploration of the standards that make science tick. The series is written by Sam Kean, author of The Disappearing Spoon—a collection of funny and peculiar stories hidden throughout the periodic table.