Where International Standard Units Come From, Part Two: The Second

This week, the origin and continued preservation of five of our favorite standard units of measure 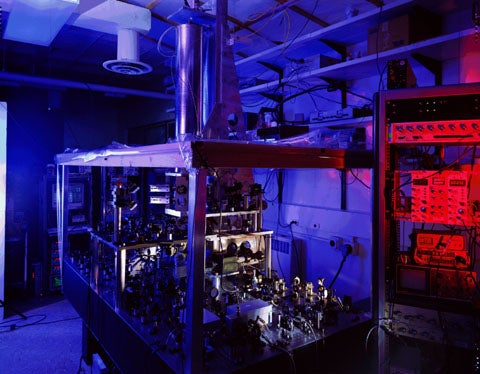 The definition of the second used to be 1/86,400th of one spin of the earth around its axis (less formally, the number of seconds in one day). But a few pesky facts made that standard inconvenient.

The length of a day varies with every trip around the sun because of the sloshing of ocean tides, which drag and slow the earth’s rotation. And metrologists (measurement scientists) didn’t want to tie a supposedly universal unit of time to the transit of a small rock around a mediocre star.

To rectify this, scientists turned to the element cesium. More specifically, they turned to cesium’s lone electron. Like all the entries in its column on the periodic table, cesium has one more electron than the full set it really desires. This electron—which resides at a higher energy level than other electrons and is therefore more exposed—normally zooms around the cesium nucleus on a specific orbit. But if light strikes the electron, it can jump to an even higher orbit.

Now, depending on whether its “spin” (an inborn property) is up or down, an electron can jump to a slightly higher or lower orbit. If the original jump was like moving up an octave from G to G, this jump is from G to G-sharp or to G-flat. These slightly different levels are known as the fine structure. And if you measure things even more precisely and take even more factors into account (like the electron’s charge and nucleus’s magnetic field), you can observe an electron jumping between levels separated by even smaller amounts—like a musical difference not of a halftone but of a quarter-tone, or even an eighth-tone. This is known as the hyperfine structure.

Metrologists exploited those hyperfine differences to create the first atomic clocks with cesium-133. Inside these “beam clocks,” a gas of cesium atoms is gathered into a chamber with a pressure of about one-trillionth of normal atmospheric pressure and excited by an intense maser (a microwave laser). This strumming with the maser excites the cesium electrons and causes them to jump to a certain hyperfine level. The key point is that the electron cannot stay excited for long, so it soon drops back down to another hyperfine level. And when it does, it emits light. This cycle of jumping up and down repeats itself over and over, and each cycle is perfectly elastic and therefore takes the same amount of time. The precision of the maser ensures that all the cesium atoms are in synch, so the atomic clock can measure time simply by counting emitted photons.

Cesium proved convenient as the mainspring for atomic clocks because the solitude of its electron means that scientists don’t have to worry (as they might with other elements) about other electrons jumping up and down and shooting their own photons off. Cesium’s heavy, lumbering atoms are fat, easy targets for the maser as well. But even in plodding cesium, the outer electron is a quick bugger. Instead of a few dozen or few thousand times per second, it performs 9,192,631,770 back-and-forths every one-Mississippi.

Scientists picked that ungainly number instead of cutting themselves off at 9,192,631,769 or letting things drag on until 9,192,631,771 because it matched their best guess for a second back in 1955, when they built the first cesium clock. Regardless, 9,192,631,770 is now fixed as the definition. And nowadays, metrologists rely not on beam clocks but cesium “fountain clocks,” which operate on the same basic physics but at much lower temperatures, barely above absolute zero. Some of these clocks are accurate to within one second every 30 million years.

But while the cesium standard has profited science by ensuring precision and accuracy worldwide, humanity has undeniably lost something. Since before even the ancient Egyptians and Babylonians, human beings used the stars and seasons to track time and record their most important moments. Cesium severed that link with the heavens, effaced it just as surely as urban streetlamps blot out constellations. However fine an element, cesium certainly lacks the mythic feeling of the moon or sun.