All this week, the origin and continued preservation of five of our favorite standard units of measure 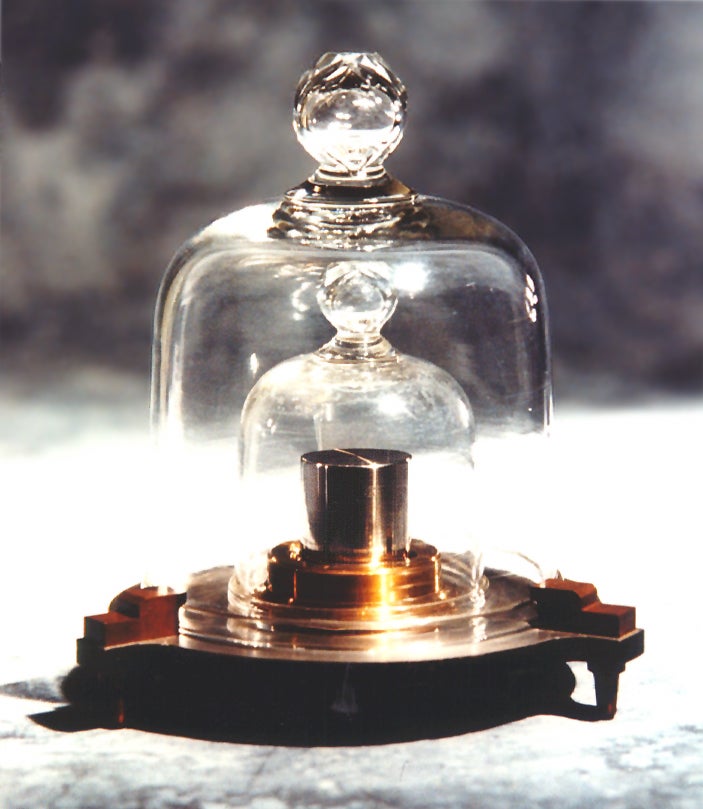 The kilogram really sticks in the craw of metrologists. Six of the seven fundamental units of the metric system have “operational” definitions—you can define them purely in words, by describing a physical process that produces something of exactly one meter, or whatever. But the kilogram has resisted all attempts to define it that way.

It’s like a feeling everyone knows and shares but cannot quite articulate. Instead, the kilogram is the last metric standard still bound to a human artifact.

That artifact is the Kilogram—a two-inch-wide, 90-percent platinum, 10-percent iridium cylinder in Paris. By fiat, it has a mass of exactly 1.000000… kilogram, and it lives a rather pampered existence. Because the Kilogram is a physical object and therefore damageable, and because the definition of a kilogram ought to stay constant, the scientists that care for it must make sure it never gets scratched, never attracts a speck of dust, never loses (they hope!) a single atom. For if any of that happened, its mass could spike to 1.000000…1 kilograms or plummet to 0.999999…9 kilograms, and the mere possibility induces ulcers in a metrologist.

So like phobic mothers, scientists constantly monitor the Kilogram’s temperature and the pressure around it to prevent microscopic bloating and contracting, stress that could slough off atoms. It’s also swaddled within three successively smaller bell jars to prevent humidity from condensing on the surface and leaving a nanoscale film. And the Kilogram is made from dense platinum and iridium to minimize the surface area exposed to unacceptably dirty air, like the kind we breathe. Platinum also conducts electricity well, which cuts down on the buildup of “parasitic” static electricity (the scientists’ word) that might zap stray atoms.

Other countries have their own official 1.000000… kg cylinder, so they don’t have to fly to Paris every time they want to measure something precisely. But since the Kilogram is the only standard, each country’s knockoff has to be compared against it periodically. The United States has had its official kilogram, called K20 (the twentieth official copy), which resides in a government building in exurban Maryland, calibrated just once since 2000, and it’s due for another calibration, says Zeina Jabbour, group leader for the NIST mass and force team. But calibration is a multimonth process, and security regulations since 2001 have made flying K20 to Paris a hassle. “We have to hand-carry the kilograms through the flight,” Jabbour explains, “and it’s hard to get through security and customs with a slug of metal, and tell people they cannot touch it.” Even opening K20’s customized suitcase in a “dusty airport” could compromise it, she says, “and if somebody insists on touching it, that’s the end of the calibration.”

Usually, the BIPM uses one of six official copies of the Kilogram (kept under two bell jars only) to calibrate the knockoffs. But the official copies have to be measured against their own standard, so every few years scientists remove the Kilogram from its vault (using tongs and wearing latex gloves, of course, so as not to leave smudges—but not the powdery kind of gloves, because that would leave a residue—oh, and not holding it for too long, because the person’s body temperature could heat it up and ruin everything) and calibrate the calibrators.

Alarmingly, though, scientists noticed during calibrations in the 1990s that, even accounting for atoms that rub off when people touch it, in the past few decades the Kilogram had lost an additional mass equal to that of a fingerprint, half a microgram per year. No one knows why.

This failure to keep the Kilogram constant has renewed interest in an operational definition for the kilogram. Some options, like counting atoms, have so far been too impossibly involved to succeed. But in recent weeks, German scientists announced that they counted an impressively high fraction of the number of atoms in a sphere of pure silicon, and think they can do even better. (The team did so by measuring the sphere’s volume very precisely with lasers, then calculating the volume of individual atoms.). Another promising idea is using a Watt balance, which would measure how much electricity it takes to suspend something with a mass of 1.000… kilogram in the air.

If the either scheme succeeds, the kilogram will have gained immortality at last, and can join the pantheon of other ethereal standards of measurement. The happiest dream of every scientist who obsesses over that mollycoddled cylinder in Paris—making it obsolete—will have finally come true.

Sam Kean is the author of The Disappearing Spoon—a collection of funny and peculiar stories hidden throughout the periodic table.