How Quickly Could a Single Supervirus Spread to Every Single Person on Earth?

If it’s a particularly contagious virus, it would spread across the planet in a year. “If it starts in New... 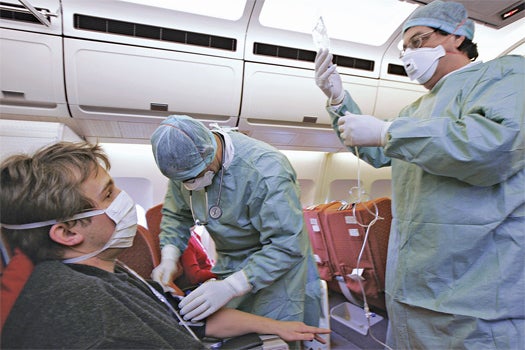 If it’s a particularly contagious virus, it would spread across the planet in a year. “If it starts in New York, it’s going to be in London certainly within a week,” says Ira Longini, a biostatistician at the University of Washington and the Fred Hutchinson Cancer Center in Seattle who uses computer models to analyze how viruses globe-trot. “And from there, it will quickly travel to the rest of North America and Europe.” For Longini’s computer forecasts to become reality, though, certain conditions would need to be met.

First, it should be a strain of influenza. As anyone who has suffered through a bout of flu knows, it affects the respiratory tract, so sneezing and coughing make it easy to infect anyone within a three-foot radius. The virus must originate in a major city with plenty of airport traffic, to ensure that it jumps continents. Arising during the winter would speed its spread too, because the “normal” colds or flus people typically catch at that time of year could throw health officials off the trail of the real megabug, says Andrew Pekosz, a virologist and immunologist at Johns Hopkins University. The idea seems to freak him out. “With everybody expressing similar symptoms, we’d end up chasing, chasing, chasing, but always being a few steps behind, never really able to interrupt the spread.”

Until next time, enjoy our past weekly illustrated roundups here. Have a science question you’ve always wondered about? Send a tweet to @PopSciFYIGuy or email to fyi@popsci.com

Ask Us Anything
Diseases
pandemics