Astrophotographer Grabs a Snapshot of the Darkest Possible Sky

If you’re going to photograph the cosmos, the first step is to find somewhere really dark where Earthly light pollution... 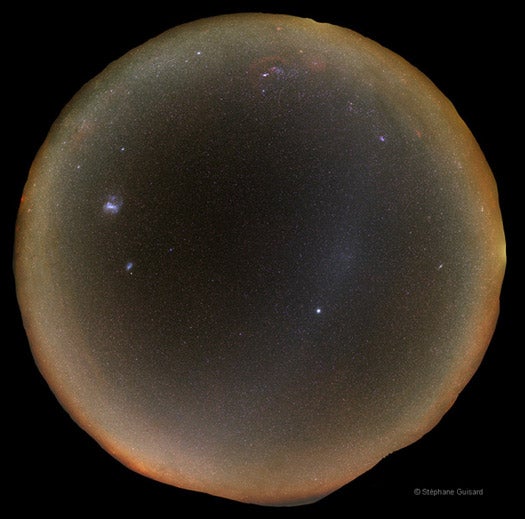 If you’re going to photograph the cosmos, the first step is to find somewhere really dark where Earthly light pollution won’t spoil your shot. Following this line of thought to its logical limits, astrophotographer Stéphane Guisard went in search of the darkest possible sky he could find here on Earth, and found it at just the right time and place in Chile’s Atacama Desert. The results are these breathtaking shots that on first glance may look noisy and polluted — until you take a good close-up look at what’s really there.

The images above and below were taken during a new moon, meaning there is no moonlight to mute the incoming light from elsewhere in the universe. Moreover, Guisard took the shot at such a time of year that the Milky Way, usually seen as a band of light across the night sky, is actually circling the horizon. The rim of light surrounding the full-sky views isn’t sunlight or light form nearby cities, but actually the galaxy itself. Guisard also took measures to time the photo so as to minimize this light as well.

The rest of the light you see is known as gegenschein, or sunlight bounced back to earth from particles in solar system. The result is a glimpse of the night sky with the least amount of intrusive, extraneous light that reduces the depth and detail of night sky pics. In the big pic above, you can see both the Large and Small Magellanic Clouds on the left, the Gegenschein effect on the right (it’s stronger opposite the sun) and the constellation Orion at the top. That bright star near the center? That’s no star at all, but Jupiter.

But if you’re just looking at the shots on this page, you’re doing yourself a disservice. Click through the link below to get up close and personal with zoom-able, pan-able versions that really let the stars shine through.