China has never been particularly apologetic about its contribution to the looming threat of space debris, but authorities might finally... 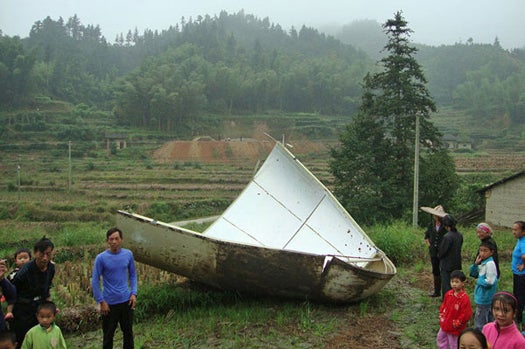 China has never been particularly apologetic about its contribution to the looming threat of space debris, but authorities might finally have to offer up some kind of conciliatory “sorry we nearly bombed your village with huge chunks of used rocket.” Last night residents of two separate villages in Jiangxi, China, awoke to very large pieces of the lunar probe Chang’e II’s launch rocket falling back to Earth around them.

Villagers in the area awoke last night to quite a ruckus, thinking that an earthquake was underway. Upon exploration, they instead found what appears to be a sizeable chunk of the rocket used to launch Chang’e II toward the moon in a launch on Friday. Fortunately, the debris fell harmlessly onto rural land, injuring no one and causing no property damage. Had the space junk rained down on one of China’s many densely packed population centers who knows what might have happened?

The good news: though the rocket debris hurtling back to the surface intact wasn’t exactly part of China’s plan, Chang’e II is thus far a successful mission. The orbiter is China’s second lunar exploration mission and will spend six months observing the moon’s surface in high-res in search of future landing sites for spacecraft. Let’s hope that lunar touch-down is a bit less abrupt than last night’s rocket landing. 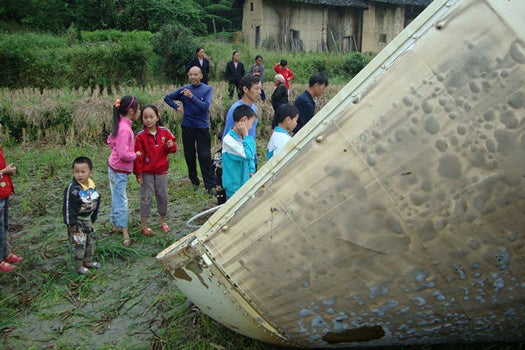