It’s true that the plains of Kansas are a more familiar backdrop for tornadoes than Times Square, but the funnels... 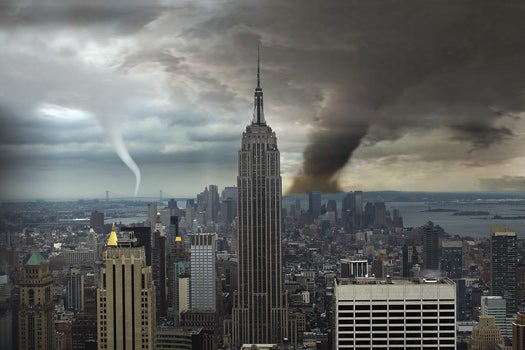 It’s true that the plains of Kansas are a more familiar backdrop for tornadoes than Times Square, but the funnels can form just about anywhere if the conditions are right.

The reason Tornado Alley, the area stretching from Texas to South Dakota and from the Rocky Mountains to Kansas, is the most active tornado spot in the U.S.—it sees hundreds a year—is not because it’s flat farmland. It’s because tornadoes form when two opposite weather systems collide under certain conditions, and this occurs with great regularity in Tornado Alley. During springtime in that region, a constant stream of cool, dry air blowing southeast from Canada runs into a similarly steady stream of warm, moist air moving northwest from the Gulf of Mexico. As these weather fronts interact, they build high-intensity thunderstorms that, if they’re strong enough, can create a powerful updraft of air. Low pressure at the ground and in the middle or upper atmosphere interacts with the rising air to create a swirling vortex that can eventually extend a tornado funnel to the ground.

It just so happens that most cities with a lot of skyscrapers are situated in places where tornado-feeding conditions evolve less frequently. But tornadoes do in fact sometimes hit cities, says Gary Conte, a warning coordination meteorologist at the Upton, New York, outpost of the National Weather Service, citing recent touchdowns in Dallas, Memphis, Miami and four of New York City’s five boroughs (Manhattan has been spared, so far). Skyscrapers and topography don’t matter. “Tornadoes form thousands of feet above building tops,” Conte says. “Skyscrapers won’t prevent the funnel from coming down, but they might influence its shape so that it doesn’t look as nice and neat as it does on a flat surface like the plains. That doesn’t make it any less of a tornado, though.”