The most detailed microscopic crystallography image ever created 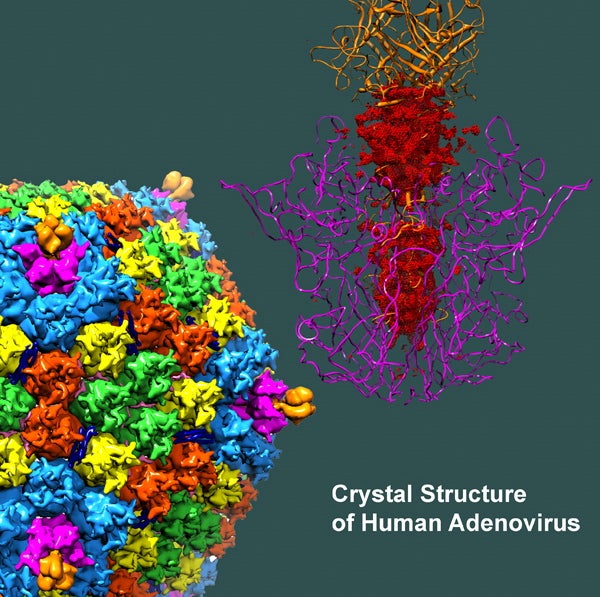 After more than a decade of work, scientists have completed a 3-D atomic-scale map of a virus that causes the common cold. It’s the largest virus ever mapped. The map could help scientists re-engineer the virus for gene therapy, as well as to create possible treatments for cancer and other ailments. Robotic systems, an advanced x-ray, and years of patience made it possible.

The human adenovirus family, which is responsible for a host of ailments ranging from colds to gastrointestinal disorders, is quite good at making us sick because adenoviruses can infect many types of cells. For several years, scientists have tried to use adenoviruses as a vector to carry therapeutic genes into cells, mostly for treating cancer and cardiovascular disease. Understanding its structure, including how it disassembles when it enters a cell, could help scientists design better vectors.

The new structure illuminates one virus’s weakest links as well as its structural strengths, according to Glen Nemerow, a research professor at the Scripps Research Institute and co-author of a paper on the virus to be published this week in the journal Science.

It’s not the first virus to have its structure mapped with x-ray crystallography; scientists have been doing that for some time now. But it’s by far the biggest one, containing about 1 million amino acids, twice the size of the next-biggest virus ever studied in this way. Its size and unique design presented a particular challenge, the researchers say. Nemerow and co-author Vijay Reddy started their work in 1998.

They needed a stronger crystal, but the process of trial and error takes a long time. They decided to enlist help from a robotic system, which can make much smaller, 50-nanoliter samples. Crystals grow faster in small drops anyway. The robotic crystallization process made plenty of crystals, but they did not diffract very well. In 2005, however, the Argonne National Laboratory installed a powerful new x-ray beam, so the researchers took their samples to Chicago. The crystals diffracted the light, but they also fell apart, which limited the amount of data they could get from one crystal.

It took several more years to build a crystal virus that was built to last and diffracted well. In the end, the scientists bounced x-rays off about 100 crystals — that’s 20 million refractions — to come up with their map.

Along with improved gene therapies, Nemerow says it might be possible to use this information to develop anti-adenovirus drugs, such as compounds that would prevent the virus from disassembling and therefore from infecting cells.

“Like an electrical engineer who wants to go into a house and put in new wiring, [a genetic engineer] doesn’t want to put something where there is another important contact,” he says. “Knowing where these important regions are in the virus is crucial.”