Water, water everywhere, but in the developing world or in areas ravaged by natural disasters – like the ongoing flooding... 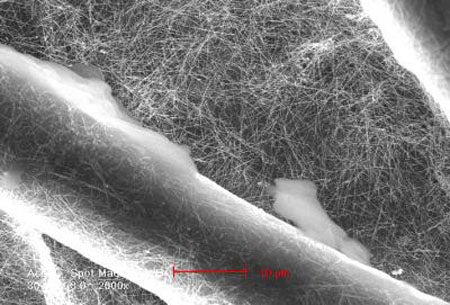 Water, water everywhere, but in the developing world or in areas ravaged by natural disasters – like the ongoing flooding in Pakistan, for instance – there’s often not a clean, purified drop to be found. Water is usually made potable in such places via filters that physically trap bacteria as water flows through, but researchers at Stanford have shown devised a high-speed filter composed of nothing but plain cotton cloth and nanotubes that can quickly filter nearly all bacteria from dirty water using less power than slower conventional water purifiers.

Most water filters simply trap living bacteria as it passes through a series of tiny pores, a method that is effective but prone to a variety of problems. For one, they are painfully slow, and in disaster situations that can lead to critical shortages as thirsty populations wait for the water to trickle through.

Further, the water must be driven through the filters with pumps, which themselves require a decent amount of electricity – a resource that can be in short supply in remote regions or at disaster sites. Such filters are also susceptible to biofouling, in which trapped bacteria form a film that clogs the pores of the filter.

The Stanford team’s filter circumvents most of these problems by simply letting the bacteria pass freely through, zapping them with fatal doses of voltage as they go. By dipping plain cotton cloth procured at Wal-Mart into a solution of carbon nanotubes and silver nanowires, the team created a filter that can kill 98 percent of Escherichia coli bacteria in water with a mere 20 volts of electricity, less than is required to operate the pumps on conventional filters.

Addressing the problems with conventional filters noted above, the team knew that carbon nanotubes are efficient conductors of electricity and that silver has bacteria-killing chemical properties. So they went about figuring out how to get all these ingredients into a single, inexpensive filter (the amount of silver used is so small that it’s negligible). The cotton simply serves as an inexpensive platform on which to lay their nanotube/nanowire structure.

Plugged into a couple of 12-volt batteries or a hand cranked generator, the filter can run until the energy runs out, its larger pores letting vast volumes of water pass quickly, and cleanly, through. No pump is needed because the pores are large enough that gravity does the trick.

The next step is trying the filter on various other bacteria to see how universal the silver-carbon combo really is. One filter can kill 98 percent of the Escherichia coli in water, but a compound filter with layers of different materials might be able to push that number even closer to 100 percent for a variety of bacteria known to cause water-borne illnesses.