A Protein Killer Could Treat All Cancers, and Possibly All Illnesses

Since last April, 19 cancer patients whose liver tumors hadn’t responded to chemotherapy have taken an experimental drug. Within weeks... 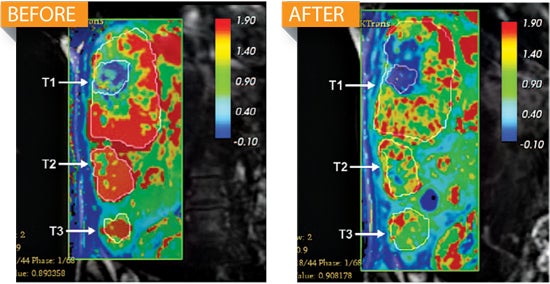 Since last April, 19 cancer patients whose liver tumors hadn’t responded to chemotherapy have taken an experimental drug. Within weeks of the first dose, it appeared to work, by preventing tumors from making proteins they need to survive. The results are preliminary yet encouraging. With a slight redesign, the drug might work for hundreds of diseases, fulfilling the promise that wonder cures like stem cells and gene therapy have failed to deliver.

The biotech company Alnylam announced in June that its drug ALN-VSP cut off blood flow to 62 percent of liver-cancer tumors in those 19 patients, by triggering a rarely used defense mechanism in the body to silence cancerous genes. Whereas conventional drugs stop disease-causing proteins, ALN-VSP uses RNA interference (RNAi) therapy to stop cells from making proteins in the first place, a tactic that could work for just about any disease. “Imagine that your kitchen floods,” says biochemist and Alnylam CEO John Maraganore. “Today’s medicines mop it up. RNAi technology turns off the faucet.”

Here’s another analogy: If DNA is the blueprint for proteins, RNA is the contractor. It makes single-stranded copies of DNA’s genes, called mRNA, which tell the cell to produce proteins. In 1998, scientists identified RNAi, a mechanism that primitive organisms use to detect and destroy virus’s double-stranded RNA and any viral mRNA. Mammals’ immune systems made RNAi’s antiviral function irrelevant (although all vertebrates, including humans, still use RNAi to regulate mRNA activity), but researchers found that introducing small segments of double-stranded RNA to cells could trigger the ancient mechanism and selectively halt the production of specific proteins.

That ability makes RNAi a potential fix for many diseases, including cancer, that arise when abnormal cells produce excessive amounts of everyday proteins. In theory, manipulating RNAi to kill proteins is simple. ALN-VSP, for example, consists of synthetic double-stranded RNA designed to match tumor mRNA that codes for two proteins: VEGF, which cancers overproduce to help grow new blood vessels, and KSP, which sets off rapid cell division. The researchers send the synthetic RNA into liver cells, and the body’s RNAi system kills both the synthetic RNA and any matching tumor-grown mRNA. Knock out the mRNAs coding for those proteins—which in the liver are produced only by cancer cells—and the tumor stops growing.

“We can turn off any one of 20,000 genes with RNAi,” says Bruce Sullenger, a molecular biologist researching RNAi at Duke University. “The challenge has been to get a drug into only the desired cells and not harm others.” Researchers have worried that a drug might disrupt normal protein production in a healthy cell, or that the immune system will destroy the drug before it reaches its target.

Alnylam overcame both concerns by packaging the drug in a fatty envelope that is absorbed primarily by the liver. This allowed doctors to administer the drug through the blood, rather than by an injection to one spot, which improves results by ensuring that the entire liver receives an even dose.

The technique’s ability to attack single genes could lead to drugs for the 75 percent of cancer genes that lack any specific treatment, as well as for other illnesses. Alnylam is already testing RNAi therapy for Huntington’s disease and high cholesterol in cell cultures; other researchers are tackling macular degeneration, muscular dystrophy and HIV. The potential has driven nearly every major pharmaceutical company to start an RNAi program.

Because the approach is fundamentally simple, RNAi therapy could be ready within two years, say experts including John Rossi, a molecular geneticist at City of Hope National Medical Center in California. Alnylam plans to enroll an additional 36 patients in the ALN-VSP trial and increase the dosage, but the early results are good enough to suggest that it could be among the first RNAi therapies to hit the market. “I think RNAi could work for anything,” Rossi says. “But even if it only works for liver cancer, it would be pretty good.” For liver-cancer patients who have been failed by chemotherapy and radiation and felt their harsh side effects, that would be wonder drug enough.