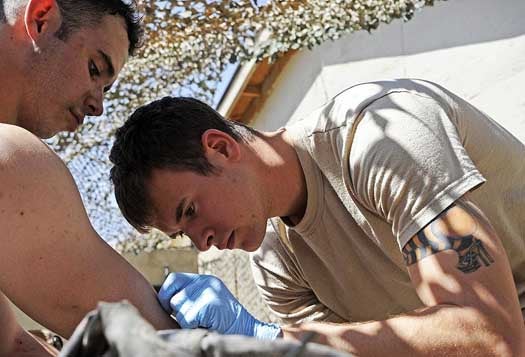 Biological threats — everything from malicious biological weapons to naturally occurring pandemics — are tricky threats to approach. Pathogens’ ability to emerge rapidly and spread even faster over large populations is particularly worrisome, as our usual method of developing medicines and vaccines takes nothing if not time — lots and lots of time. But the army is looking for a simple procedure — a quick pffft! of air followed by a short bzzzz! of electrical pulse — encapsulated in a single tool that can deliver a cocktail of DNA vaccines to troops or civilians quickly, efficiently, and as painlessly as possible.

In a small business solicitation titled “Multiagent Synthetic DNA Vaccines Delivered by Noninvasive Electroporation” released by the Army last week, the military asks for companies to devise a single integrated tool that can deliver more than one DNA vaccine at a time directly to cells, using a burst of gas, then help the vaccine penetrate cells through a procedure called intramuscular electroporation, which basically involves shooting short electrical pulses into the injection site to stimulate cell membranes to be more porous.

Why? For one, DNA vaccines, though largely untested in humans, can be developed rapidly during a state of emergency and then be painted onto microscopic gold beads and blasted through the skin with helium gas for needle-free inoculation. That not only saves on time spent developing vaccines, but also on inoculation, as every dose doesn’t require its own sterilized needle. It’s also, ideally, less uncomfortable.

The problem is, of course, DNA vaccines aren’t very far along, and the gene guns that are supposed to quickly blast the DNA through the skin presently require surgically exposed muscle to be effective. Electroporation isn’t exactly comfortable either — current methods can really hurt and might cause mild tissue damage.

But if the Army can figure out a way to make the painful and invasive less painful and non-invasive, they might be onto something. According to the solicitation, it seems it is banking on an “if you build it, they will come” philosophy at this point: “In order to advance DNA vaccine technology, a novel and innovative solution for a more tolerable, yet still effective delivery method is needed. The optimal vaccination strategy would capitalize on the efficiency of electroporation, eliminate the discomfort associated with intramuscular injection, and be useful for simultaneous delivery of two or more DNA vaccines.”

Build the delivery device, the solicitation suggests, and the DNA vaccines that can combat threats as they emerge will follow. Should a future enemy ever decide to release a genetically engineered pathogen on troops deployed in the field, the Army will be ready.