Another holiday season, another batch of fresh iPods. We’ve been testing the new Touch, Nano and Shuffle to see how... 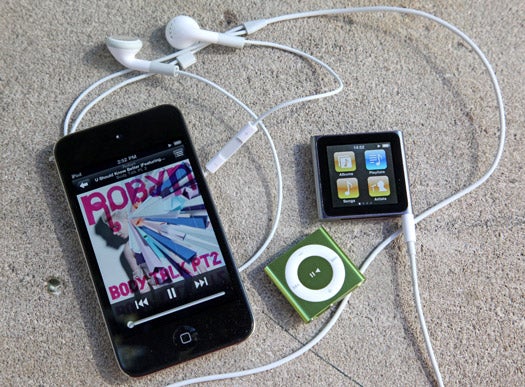 Another holiday season, another batch of fresh iPods. We’ve been testing the new Touch, Nano and Shuffle to see how they fare with last year’s models. Find our full impressions on all three here. 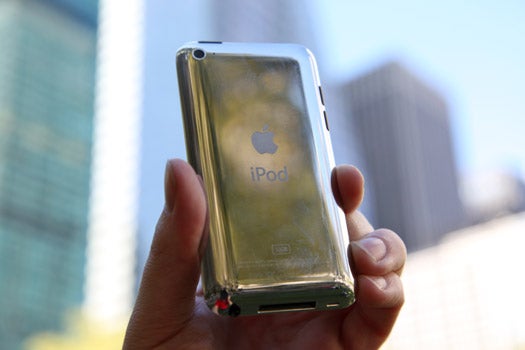 Yes, the chrome-y back is still easily scuffed

What’s New
The Touch is now almost up to speed with the iPhone 4: new is a high-res Retina display at 960 x 640 pixels; both a back and front-facing camera for HD video and FaceTime, respectively; a speedy Apple A4 chip; gyroscopes for more accurate tilt controls; and a chassis that’s been shaved down to just over a quarter of an inch thick.

The Good
The iPhone-without-the-phone keeps getting better. It surpassed the Nano this year as the best-selling iPod with good reason—it gets you into the App Store, matches the iPhone as the best mobile computing device when you’re within Wi-Fi coverage, and is one of the sleekest industrial designs in Apple’s portfolio—all without an AT&T contract.

The Bad
Always-on data and GPS aside, the Touch still isn’t quite an iPhone. The rear camera is not nearly as good. When compared to the iPhone 4, its video noticeably lacks contrast and saturation, and in still mode, the max resolution is a paltry 960 x 720 compared to the iPhone 4’s impressive five-megapixel sensor. In their reviewer’s guide, Apple doesn’t even mention the camera’s ability to take stills, so this is obviously something they’re not proud of. And while the display matches the iPhone’s ultra-high resolution, the panel is not quite as crisp and contrasty.

The Verdict
While still a notch down from the iPhone 4 in a few departments, App Store access with no contract in a package this sexy remains a no-brainer for those in need of a dedicated MP3 player that’s not a phone. 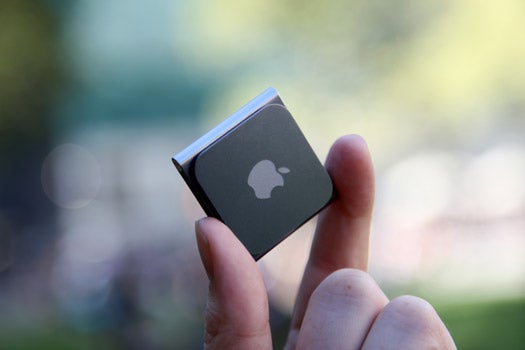 The Good
The new Nano shrinks all the music capabilities of the old one (video is out) into a crazy small package. Also, the clock screen saver doubles as a wristwatch!

The Bad
I’ve got to say, I miss the clickwheel. I don’t disagree with Apple’s current core design philosophy that touch interfaces are the future. But the new Nano demonstrates where multitouch can get dicey—when the screen is too small. At just 1.54 inches (diagonal) the Nano’s display can fit only three-and-a-half list items (songs, albums with art, etc) on the screen at once. That means a lot of swiping to get through a longer album’s tracks (and a partially obscured view of the screen while you’re doing it). You don’t want to cut all the hilarious interludes from your Lil’ Wayne mixtape just to save space now, do you?

Navigating menus can also be tricky. A right-swipe brings you back a step, and a left swipe uncovers additional options at certain points. But the small screen often forces you to make both gestures over other tappable controls already on the screen. This can result in mis-taps, especially if you’re switching tracks while fading fast on the treadmill like I do at around mile three.

The Verdict
My previous-gen Nano can display ten text list items and six album covers per screen, and provides a more intuitive way to scroll through them quickly without blocking the screen. This could come down to personal preference, but for me, the hard buttons are more advantageous than a smaller form factor. Because hey, both iPods are practically weightless. If you exercise in pocketless clothing and hate to strap on an armband, the more capacious Nano with its clip (and screen) could be a nice step-up from your workout Shuffle. But beware the tiny touchscreen. 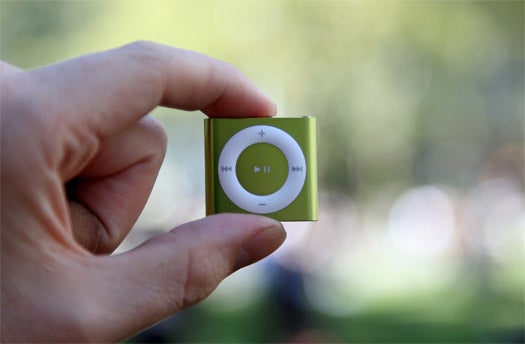 What’s New
Gone is the no-buttons, stick-of-chewing-gum design from the last generation, killed in favor of something that more closely resembles the second-generation’s round ring of buttons. They’ve made the controls larger while shrinking the overall product; now it’s an even tinier aluminum chip clip with buttons.

The Good
One day, Apple will find a way to sell us something with multitouch that doesn’t have a screen. As of now they haven’t (YET), so the new Shuffle relies on a hybrid control scheme from previous generations that works perfectly. Gone is the headphone wire remote for advancing tracks according to a coded morse code of clicks; it’s been replaced by the second-gen’s friendly round of control buttons. What remains from the buttonless previous version is the cool VoiceOver feature that will announce the current track name, artist, playlist or battery remaining at the press of a dedicated button. It’s such a useful feature, it should be standard across the line (How many times have you pulled your shuffling music player from your pocket to ID a song you couldn’t quite remember?). Plus, it’s fun to hear Mr. Synth Voice pronounce your favorite artists and tracks (“Yeah-Ma-Ha….The Dream”).

It’s not often Apple admits it’s wrong, but in smartly reigning the crazier, buttonless Shuffle back in and adding buttons, they’ve improved on a product that tops all previous generations easily.

The Bad
Sure, it’s more convenient to have a screen, but that’s not really the point here. And the headphone-mounted clickable remote would have been handy, but its absence means many will just clip the thing somewhere external and use the buttons on the face.

The Verdict
A smart rollback. It doesn’t get much more perfectly executed than this for $50.