Video: UK Animators Use Cellphone and Microscope To Film Smallest Stop-Motion Animation Ever

Using a Nokia N8 smartphone and a CellScope, the team behind the Wallace & Gromit series has made the world’s... 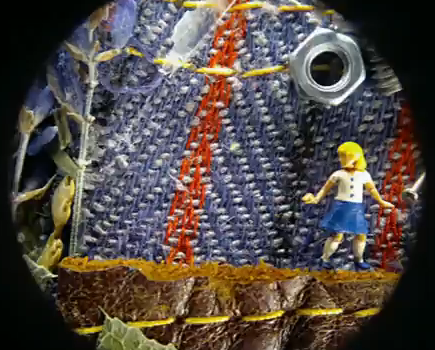 Using a Nokia N8 smartphone and a CellScope, the team behind the Wallace & Gromit series has made the world’s smallest stop-motion animation film.

Follow 0.35-inch-tall Dot as she runs through an obstacle course made of British currency, rides a bumblebee and stitches her way out of trouble. The music is catchy too.

Animators at the UK studio Aardman used a 3D printer to make 50 different versions of Dot, because she is too small to manipulate or bend like they would other stop-motion animation characters. The figurine’s tiny features stretched the limit of the printer — any smaller and it would be hard to make distinct limbs. Each one was hand-painted by artists looking through a microscope.

Directors Ed Patterson and Will Studd attached a CellScope (winner of a PopSci Best of What’s New award in 2008) to a Nokia N8 12-megapixel camera to film Dot’s struggle in her microscopic world. They said Nokia commissioned them to make the film in celebration of CellScope’s potential to improve medicine in the developing world.

CellScope is the brainchild of Daniel Fletcher, a bioengineer at the University of California-Berkeley, who combined a cellphone camera with a 50x magnification microscope.