Here’s a novel way to get a little more out of time spent in the bathroom. An industrial design student... 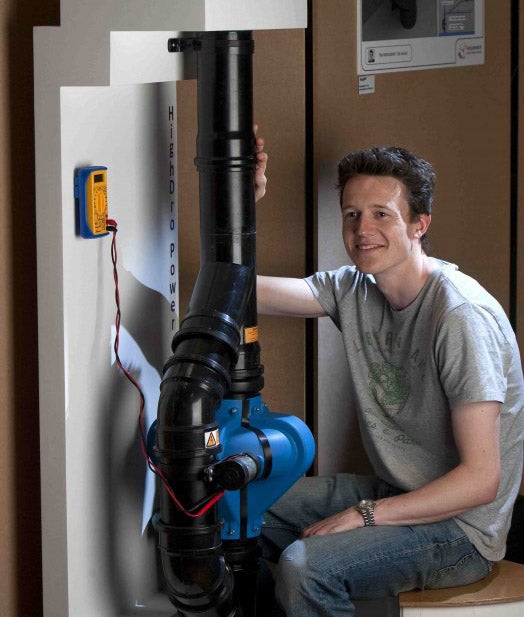 Here’s a novel way to get a little more out of time spent in the bathroom. An industrial design student at De Montfort University in Leicester, UK, has created a clever power generator that turns falling wastewater into electricity. The HighDro Power is a waterwheel-like turbine that can be incorporated into the pipes of tall buildings to turn one man’s waste into another man’s wattage.

Student Tom Broadbent’s inspiration came when he emptied a bath in a hotel room and it drained quite quickly and with impressive force. He started tinkering around with ideas for harnessing the kinetic energy that accompanies each drained sink or flushed toilet, using rapid prototyping machines and vacuum forming to create the parts. The result: a four-blade turbine that drives a small generator.

Installed in series in a tall building, those generators can return quite a bit of power either to the building itself or to the grid. It’s estimated that HighDro Power can save a seven-storey building more than $1,000 per year in energy costs (though this estimate fails to specify how many of the units you would need, the footprint of the building, or the nature of its occupancy – still, $1,000!).

Broadbent has entered the device in the Grand Designs Live show and the Dyson Awards competition, where it very well could rack up some accolades (and some seed cash for a commercial version). Until it hits the market, try not to feel too guilty knowing that each time you visit the restroom you’re flushing perfectly good electricity right down the toilet.