It’s an ambitious recycling project to be sure, but Dutch visionaries want to turn the Pacific Garbage Patch into a... 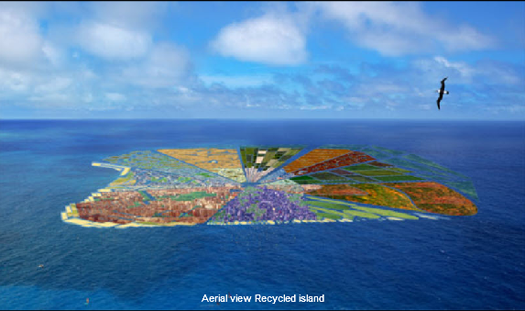 It’s an ambitious recycling project to be sure, but Dutch visionaries want to turn the Pacific Garbage Patch into a self-sufficient, green island paradise that draws its resources from the ocean and the garbage floating therein.

“Recycled Island” would be a nearly 4,000-square-mile oasis with three primary goals: to recycle all the plastic floating in the water there, to use that material to establish a seaworthy island, and to ensure the island is self-sustaining. Roughly the size of Hawaii’s big island, it would be its own nation with its own laws. Residents of the island would harvest seaweed to create fertilizer for crops and food for fish farms, as well as to make biofuels and medicines. Meanwhile, chemicals could be extracted from the toxic water in the trash patch.

Over time, so the plan says, the island would feed off the patch until it ceased to be the disgusting environmental mess that it is. And while it seems like a pretty far-fetched scheme at this point, organizers are looking to recruit the right scientists that can help them take the first steps toward recycling the patch into useful materials. Even if a paradise island doesn’t rise out of the ocean, perhaps by putting their heads together these scientists and engineers will figure out a feasible way to clean up the mess before things get too much worse.