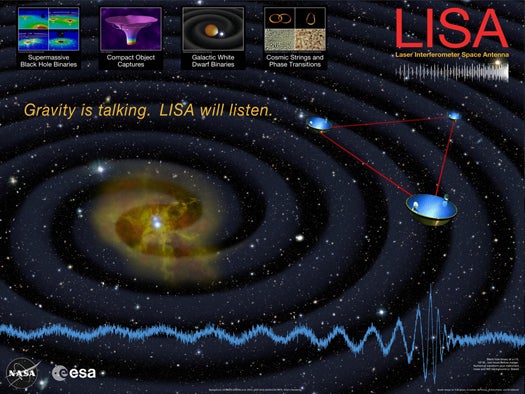 CERN’s Large Hadron Collider is currently the biggest science experiment in operation, but it may have to pass that mantle on soon enough. A collaboration between NASA and the ESA plans to launch three spacecraft into orbit around the sun 3 million miles apart, then have them shoot lasers at each other, all in the name of proving the existence of gravitational waves, the last piece of Einstein’s relativity theory that is as yet unproved.

Einstein’s general relativity predicts several things, such as gravity’s ability to bend time light and the constant speed at which gravity travels. But a means to prove the existence of gravitational waves — huge ripples in time and space that flow outwards from the collision of huge celestial bodies like black holes — has eluded scientists for years.

The Laser Interferometer Space Antenna, or LISA, aims to do just that. Three spacecraft, each carrying floating cubes of gold/platinum alloy, will leave earth and settle into different solar orbits 3 million miles apart. They will then fire laser beams between one another, measuring the relative positions of their respective cubes to within 40 millionths of a millionth of a meter.

If gravitational waves do exist, they should slightly alter the distance between the cubes, making them detectable for the first time, a feat ground-based instruments have been unable to accomplish. And if they do prove to be real, gravitational waves should offer researchers a good deal of information about the universe and its composition.

Work is already underway on LISA’s instruments, and British-based Astrium EADS is already preparing a precursor mission called LISA Pathfinder due for launch next year. As for LISA, don’t hold your breath. The largest scientific instrument in the universe isn’t slated for launch until 2020.