Can Physicians Who Work on Humans Treat Animals Too? 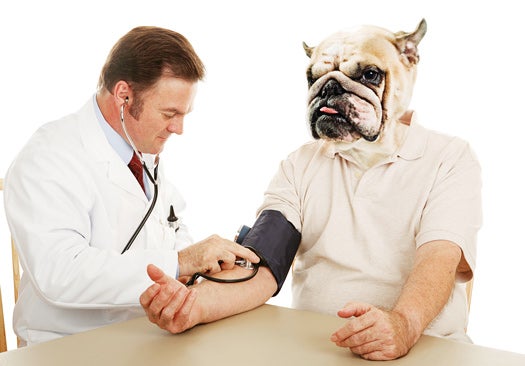 Faced with such a scenario, physicians would be armed only with what they know about human biology. And that doesn’t go very far, says Rika Maeshiro, the director of Public Health and Prevention Projects for the Association of American Medical Colleges.

If, she explains, a physician simply had to treat an animal, three factors stand in the way of effective care.

First, the diseases animals contract might look foreign to a physician, and animals can’t say what’s bothering them. And even if the doctor identified the problem, the same injury to a human can have different consequences for an animal, adds Kimberly May, a veterinarian and spokesperson for the American Veterinary Medical Association. “A broken leg isn’t fatal for a person, but very well could be for a horse,” she says.

Second, as any doctor knows, some cases call for training in a specific type of medicine. “There’s a big difference in treating a wound and treating congestive heart failure,” Maeshiro says. In most emergencies, a versatile trauma doc would have the best shot at providing care.
Third, some animals might be too exotic. The bodies and systems of mammals like dogs, cats, pigs and cows have some resemblance to humans’, so a doctor would at least have an idea where to start, Maeshiro says. “But if someone comes up to you with a snake. . .”

And what if you, a human, collapse on a plane? Could a vet help? Possibly, because anatomy and common ailments will be familiar. But vets aren’t trained to treat human infectious diseases, May says, and there are differences in CPR techniques. “Outside of extreme situations, we don’t like physicians providing veterinary medicine, and we vets stick to animals,” she adds. “It’s just professional courtesy.”

Animals
Ask Us Anything
Medicine
news