Mathematical Model Shows What Future Flags Would Look Like as U.S. Grows

If Puerto Rico becomes a state, we’d have to add a 51st star to the flag. An Emory University mathematician... 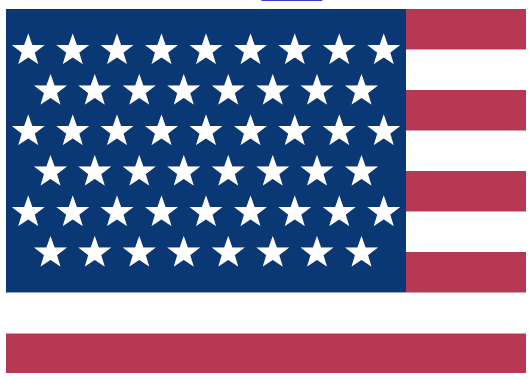 If Puerto Rico becomes a state, we’d have to add a 51st star to the flag. An Emory University mathematician has come up with a method to do it without disrupting Old Glory’s symmetry.

The Puerto Rico Democracy Act of 2010, currently making its way through Congress, could make it it a necessity. The bill would grant the territory’s residents a vote on their status, and options include statehood or independence.

Mathematician Skip Garibaldi analyzed the country’s past flags to figure out the most common flag patterns, and worked out which patterns would work best for varying numbers of stars.

This interactive flag calculator allows you to come up with flag designs for states up to 100, with a couple exceptions.

You can also subtract states, which might come in handy if certain Texas politicians ever get their way.

As Slate’s Chris Wilson explains, most flag designs arrange the star-spangle in ways that are vertically symmetrical, horizontally symmetrical, or both. This means the left half of the blue star field matches the right, or the bottom half matches the top. The current flag has both forms of symmetry.

Symmetry breaks in a 51-star flag, but the pattern would still look similar to our current design in that it’s made of alternating rows. Most star configurations align each row of stars with gaps in the row above, making the stars less cramped, as Wilson explains.

Following those guidelines, there are six flag templates that can theoretically fit any number of states up to 100 — except 29, 69 and 87. The “long” template involves alternating rows of even and odd numbers of stars, starting with the longer row. The “short” template is similar, but starts with the shorter row. In the “Wyoming” template, used after the 44th state was admitted to the Union, the first and last rows have more stars than the interior rows. Conveniently, this configuration also resembles the Equality State.

Using those templates, there are plenty of ways to make your own gallantly streaming star-spangled banners. And it’s just in time for Flag Day on Monday.