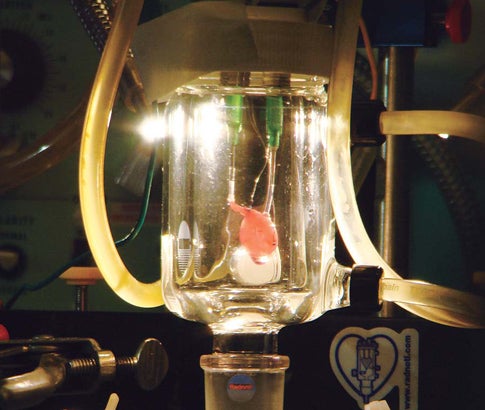 In late 2005, cardiac researcher Doris Taylor revived the dead. She rinsed rat hearts with detergent until the cells washed away and all that remained was a skeleton of tissue translucent as wax paper—a ghost heart, as Taylor calls it. She injected the scaffold with fresh heart cells from newborn rats. Then she waited.

What she witnessed four days later, once the cells had a chance to make themselves at home, was astonishing. “We could see these little areas that were beginning to beat,” says Taylor, director of the University of Minnesota’s Center for Cardiovascular Repair. “By eight days, we could see the whole heart beating. The first time that happened, it was like ‘yes!’ “

The experiment, which was reported this year in the journal Nature Medicine, marked a watershed moment: the first time scientists had created a functioning heart in the lab from biological tissue. For the 62 million people living with congestive heart failure, a condition in which the heart is no longer fit enough to pump blood through the body, drugs and heart-repair procedures frequently fall short; 60 percent of patients die within five years of diagnosis. A recellularized heart like Taylor’s represents the first real hope for a cure—and she recently brought it one step closer to reality by devising a way to populate it with blood vessels. “There’s a lot of smoke and mirrors in this field,” says Todd McAllister, the CEO of Cytograft, a California-based tissue-engineering company. “Some people say they can grow a heart from scratch in 10 years, which is ridiculous. But Dr. Taylor’s approach is more realistic because it’s so simple and elegant. By using an existing heart, she’s taken away all of the structural issues.”

Taylor’s system involves flushing animal hearts of cells using a cleanser, at which point only the extracellular matrix remains and “the hearts look almost clear,” Taylor says. The next step is to infuse the hearts with a mix of mature and progenitor cardiac cells, which can come from a patient’s own body to ensure compatibility. Incredibly, for reasons the team still doesn’t understand, the cells seem to know how to divide and proliferate into cardiac tissue inside the empty-shell hearts.

This year, Taylor has continued to forge ahead toward her goal of creating transplantable, made-to-order human organs. Soon after she published her rat-heart results, she started working on making recellularized pig hearts—closer in size and shape to the human equivalent—that could pump blood and generate electrical impulses. “Our hope is that someday we’ll be able to take a cadaver or pig organ, decellularize it, and transplant your own cells into the matrix to make an organ that matches your body,” Taylor says.

Before a reliable human donor heart can be grown from a matrix, however, scientists must coax it to do more than just beat. “A heart isn’t just a muscle. It also needs arteries and other tissues,” explains cardiologist Robert Bonow of Northwestern University. “Doris Taylor has replaced the motor inside the chassis, so to speak, but she’s got to find a way to get the other parts in there too.”

She’s working on it. Taylor’s team has washed away the cells inside a rat aorta, for example, which is about the same size as a human coronary artery, and successfully seeded it with rat endothelial cells. The blood vessels grown in the lab are strong enough to withstand 19 pounds of pressure per square inch, a high enough performance threshold to make them viable in transplant hearts.

Taylor is focused on starting human clinical trials in the near future; she envisions a transplantable organ becoming available in “years, not decades.” But she’s also looking at the incredible number of other possible uses for her cell-seeding procedure. “The coolest thing is, it’s not just about hearts—we could do this with kidneys, lungs and livers as well.”