Anti-Obesity Pill Swells in Your Stomach, Making You Full Before You Even Start Eating

The gelatinous capsule has passed its first human trials 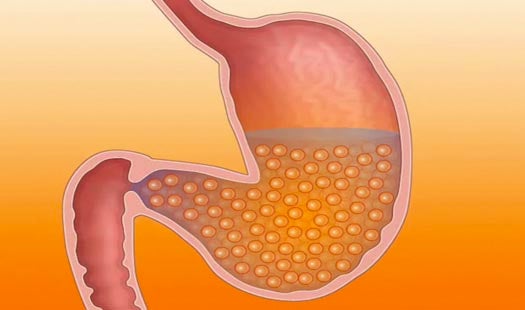 It’s no secret that obesity is a growing problem for Americans. Our kids are growing larger, our rates of diabetes and heart disease show no signs of retreating, and our military is worried that the next generation of warfighters will be too big and sluggish to get the job done. But Boston-based Gelesis has engineered a complex obesity solution that works by a simple mechanism: take a pill, become full, eat less.

The idea of shrinking stomach size to reduce the amount of processed foodstuffs a person can consume in one sitting isn’t a new idea, but conventional methods of doing so – stomach stapling or gastric bypass surgery – carry with them a bevy of inherent risks (not to mention they’re invasive). Gelesis has engineered a similar plan of attack called Attiva, but rather than shrinking the stomach, it aims to reduce gastrointestinal real estate from the inside.

Gelesis engineered a super-absorbent polymer – is it ironic that it’s derived from an unspecified food source? – that can be reduced to small beads about the size of a grain of sugar. These tiny polymer beads swell up more than 100 times over when introduced to water, kind of like those little sponges you used to play with in the bath. So when you down a pill with a glass of water, the capsule dissolves in your stomach and the hydrogel beads begin to grow. In a few minutes you’re feeling pretty full, and that second Double Down from KFC is decidedly less attractive.

Of course, now you have a belly full of hydrogel, and this is where the engineers at Gelesis had to be clever. The food is now mixed in with the gel, but you still need to digest that food (the object here is weight loss, not starvation). The hydrogel keeps food in the stomach longer, giving stomach acid more time to break down both the food and the hydrogel, which begins to release its water. Everything then moves to the small intestine where the gel can re-expand to some extent, slowing the absorption of fatty materials and sugars. Finally everything ends up in the lower bowels, and the rest is history.

The clever part of the engineering, of course, was creating a polymer that can stand up to changing pH levels so that it never fully breaks down; the company claims its product never touches the bloodstream, making it more of a medical device than a medication. How will the FDA treat it? Who knows, but it did just pass its first human trial without any problems beyond the occasional stomach ache. And let’s be honest, that second Double Down probably would have given you a stomach ache anyhow.