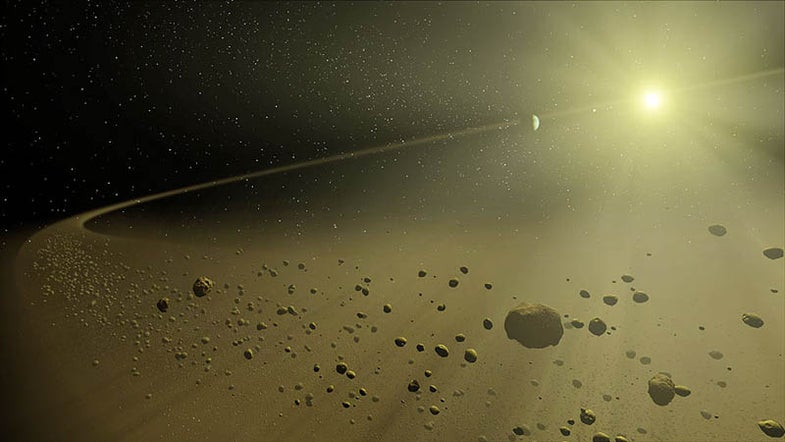 Move aside buddy, I need to vaporize some water. NASA/JPL-Caltech/T. Pyle
SHARE

A NASA telescope on Hawaii’s Mauna Kea helped scientists gauge the spectrum of infrared sunlight reflected by 24 Themis. Their findings revealed a spectrum consistent with both frozen water and organic material on the 124-mile-wide asteroid, which sits halfway between Mars and Jupiter.

That presented a bit of a mystery, because sunlight would typically cause ice on the asteroid’s surface to vaporize. But the latest study published in the journal Nature suggests that ice gets continually replenished by outgassing of water vapor through cracks from inside the asteroid.

Themis belongs to a family of asteroids which formed from the breakup of a larger body long ago, and so it’s likely that the parent body had ice. The results may force scientists to rethink their view of the early solar system’s evolution.

“It now appears that when the asteroids and planets were first forming in the very early Solar System, ice extended far into the Main Belt region,” said Josh Emery, a planetary scientist at the University of Tennessee in Knoxville. “Extending this refined view to planetary systems around other stars, the building blocks of life — water and organics — may be more common near each star’s habitable zone.”

The discovery also raises questions about the difference between comets and asteroids, given that scientists have usually viewed asteroids as primarily rocky and comets as icy. Past theories about comets bringing water to Earth were shot down when it turned out that comet water held different isotopic signatures than water on Earth.

This study emerged just as extraterrestrial hunters have gathered for the biennial Astrobiology Science Conference near Houston. Steve Squyres, a planetary scientist at Cornell University in Ithaca, noted that the find could boost interest in visiting an asteroid during future missions.

“Certainly we believe that availability of water and availability of organics are necessary conditions for the origin of life and for sustaining life,” Squyres said during a NASA teleconference today. “We should go where the data leads us.”

Even Stephen Hawking would probably agree with that, despite his cautionary warnings about more intelligent and advanced alien species with hostile intent.