Just in time for summer: water that stays fluid at –183°C 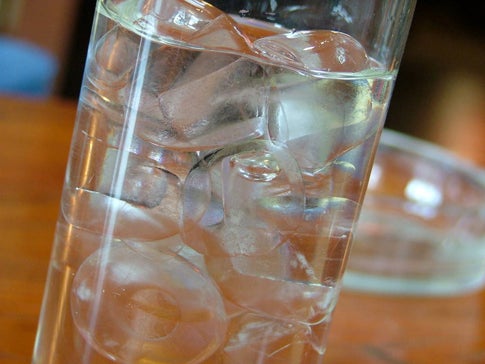 I generally only have a use for two types of cold water: The wet kind that comes in invigorating showers, and the solid kind that goes in Scotch. Turns out, I’ve been limiting myself. Researchers claim to have discovered two additional kinds of cold water, types that stay liquid well below zero degrees.

The scientists claim to have found the two types of water in the microscopic cracks that appear in regular ice, but some researchers remain skeptical of the discovery.

The two new types of water, known as low-density liquid (LDL) and high-density liquid (HDL), were predicted back in 1992. Varying attempts to observe LDL and HDL failed until Dino Leporini, a researcher at the University of Pisa in Italy, devised a scheme to detect the water directly.

Using an organic “probe” molecule called TEMPOL, Leporini measured the viscosity within the blocks of ice he studied. When he detected some of the TEMPOL moving faster than ice would allow, Leporini knew the TEMPOL molecules were in liquid water, not solid ice. And since the temperature in the ice was well below freezing, the liquid had to be either LDL or HDL. Leporini claims he detected TEMPOL moving at both the faster speed indicative of HDL, and the slower speed expected from LDL.

However, that very technique has led some to question the results. Pablo Debenedetti, a physicist at Princeton University, doesn’t think the technique is fine enough to distinguish between the two types of super-cool water, while Austen Angell, a water specialist at Arizona State University, thinks that Leporini detected pockets of TEMPOL itself moving as a liquid, rather than any kind of water.

Until an independent source can replicate and verify Leporini’s experiment, a number of questions will remain unanswered. Meanwhile, I will stick with the type of liquid water that I’m most used to: seltzer.