Scientists Figure Out How To Unboil Eggs 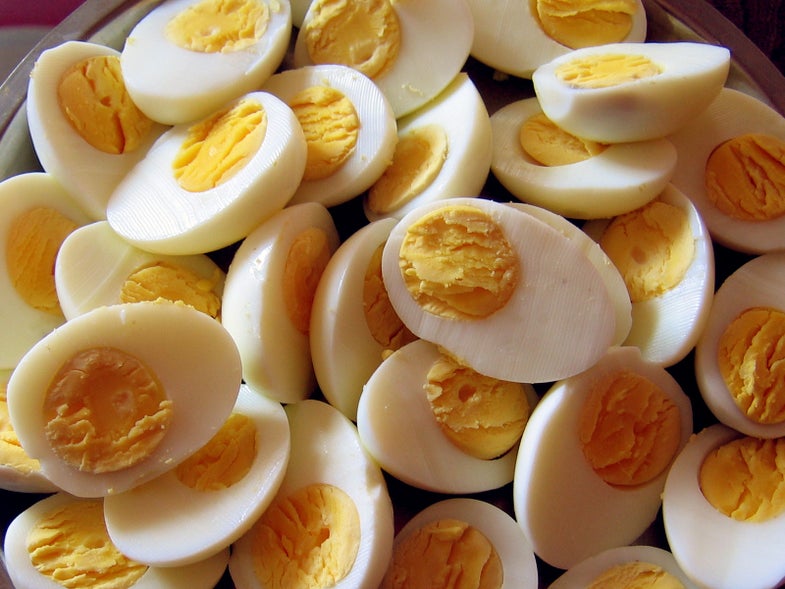 It has often been said that you can’t unscramble an egg. But you might be able to unboil one.

When you boil an egg, the heat causes the proteins inside the egg white to tangle and clump together, solidifying it. New research published in ChemBioChem by scientists at UC Irvine shows how they can essentially reverse the clumping process by adding chemicals to a cooked egg.

“Yes, we have invented a way to unboil a hen egg,” UCI biochemist Gregory Weisssaid in a statement. “In our paper, we describe a device for pulling apart tangled proteins and allowing them to refold.”

And they didn’t just go for a standard 10-minute hard boiled egg. No, the researchers decided, just to make absolutely sure the whites were cooked, to boil the eggs for 20 minutes at 194 degrees Fahrenheit. Adding urea to the eggs untangled the knotted proteins by chemically breaking them into bits, returning the eggs to a liquid form. (Note: Urea is one of the main ingredients in pee, so these unboiled eggs are probably not delicious.) Then the researcher put the (now liquid) solution into a machine called a ‘vortex fluid device.’ The device pieces the broken proteins back together within minutes—a vast improvement over older methods of reconstituting proteins, which could take days.

But unboiling eggs isn’t the main focus for the researchers. “The real problem is there are lots of cases of gummy proteins that you spend way too much time scraping off your test tubes, and you want some means of recovering that material,” Weiss said.

Other researchers from around the world have been looking into the unboiling issue, including researchers from Malta who published research on the same subject last January. The scientists at UC Irvine have filed for a patent of their method, and hope that it will eventually find uses in industries from cheese-making to pharmaceuticals.