When you have 26 children, your DNA will probably still be walking around 200 years later 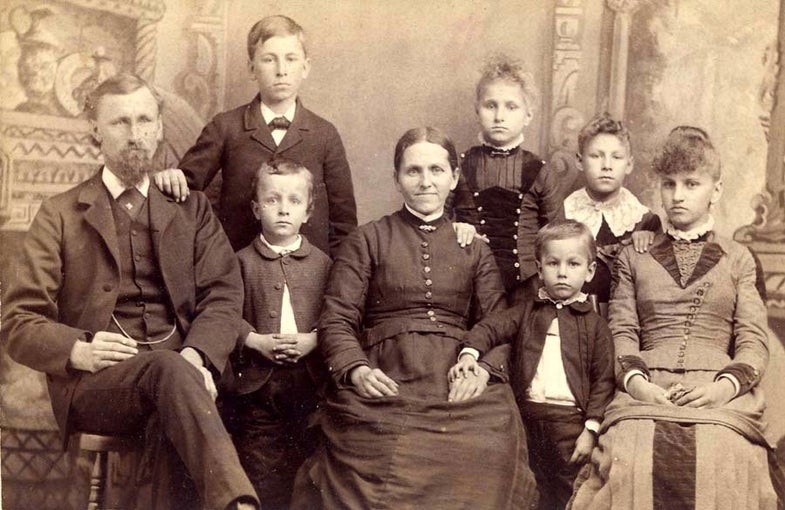 David Speegle was a preacher in Alabama in the 1800s. Apparently he was very serious about the Bible’s charge to “be fruitful and multiply.” He had 26 children and more than 150 grandchildren. From there, the numbers of his descendants expanded. Today, there are so many Speegle descendants in the United States that a popular family history website, Ancestry.com, was able to reconstruct large portions of Speegle’s and his spouses’ genomes using only data from its customers.

Ancestry.com geneticists have reconstructed enough of Speegle and his two wives’ DNA that they’ve found about 50 percent of all of the genes you would expect in one person, the company announced today. The reconstruction project offers a glimpse into the biology of people who lived 200 years ago, done entirely without taking hair or other bits from Speegle and his wives. Pretty cool. The project also shows the collective power of the family trees and DNA samples Ancestry.com holds in its possession.

“We have well over half a million genotype samples from our database and many, if not most, of the samples are associated with gigantic family trees that a lot of people have been spending years building,” Catherine Ball, vice president of genomics for Ancestry.com, tells Popular Science. That data, which Ancestry.com users upload when they use the site, were crucial to the reconstruction project.

“It’s probably relatively accurate because they have such an amazing database.”

“It’s probably relatively accurate, because they have such an amazing database,” says Brenna Henn, a population geneticist at Stony Brook University who doesn’t work for the website. “It’s certainly cool for the customers.”

Those who use Ancestry.com start by filling in the parts of their family tree that they know, such as the names and birth dates of their parents or grandparents. From there, the site’s algorithms use their own database of birth certificates, immigration forms, and other official records to help customers fill in previously unknown members of their family trees. For an additional $100, users may send a spit sample into Ancestry.com for DNA sequencing. Ancestry.com uses the DNA to tell users their ethnic origins and to fill in users’ family trees further.

To reconstruct Speegle and his wives’ genomes, Ancestry.com geneticists used the site’s family trees to look for customers who had sent in spit and whose last common ancestor was Speegle. Whenever those customers had long stretches of DNA that were identical to each other, the geneticists knew those stretches must have been from Speegle and one of his wives—either Winifred, his first, or Nancy, whom he married after Winifred died. The geneticists also looked at the Speegle family tree overall, seeking genes in common throughout the tree.

The company informed Speegle’s descendants, who are Ancestry.com customers, about the project today, says Melissa Garrett, a public-relations officer for the company. However, the Ancestry.com doesn’t plan to perform the same project over for other users. “We set out to attempt a reconstruction really as a proof of concept,” Ball says. Now that the company knows they can do it, they won’t do it again unless they want to test new DNA-reconstruction techniques.

“If you had six or even kids, you will have most of genome still walking around right now.”

Ancestry.com geneticists chose Speegle’s family to reconstruct from because it is especially large, giving them plenty of data. But from what they’ve seen among their customers, they think most American families from Speegle’s era have a good number of descendants alive today.