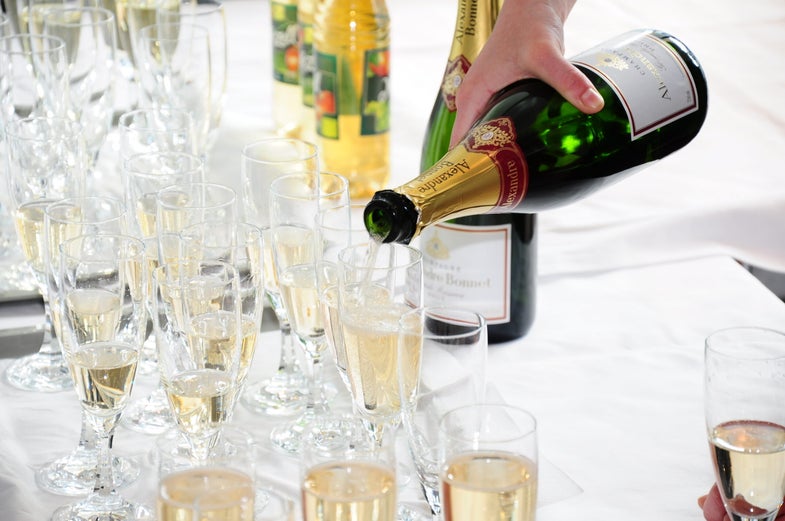 Losing a shipment of over 160 bottles champagne in the Baltic Sea must have been a huge blow to European importers back in the early 1800’s. But their loss is definitely our gain. Discovered on the seafloor in 2010, the shipwrecked cargo has become a treasure trove of information to scientists interested in how alcohol was made in the past.

In a new study published today in PNAS researchers analyzed the champagne, finding that it was still remarkably unspoiled after its sleep with the fishes.

This isn’t the first analysis of alcohol from the ill-fated shipwreck. Last month, scientists from Germany analyzed and tasted varieties of beer that were also aboard the ship.

Unlike the beer, which was contaminated by seawater, the champagne (manufactured by Heidsieck, Juglar, and Veuve Clicquot-Ponsardin) stayed impressively intact in the cold, dark waters of the Baltic Sea. A few bottles of the champagne were put up for sale in 2012, fetching prices of $156,000 for a single bottle. Expert taste-testers described the sparkling wine as “spicy,” “grilled,” and “leathery”. Unfortunately, even though the corks were undamaged, the CO2 slipped out of the bottles in the 170 years underwater, leaving the researchers with only a tingling feeling on the tongue, as opposed to bubbles.

Based on chemical analysis of the wine, which showed that it contained added sugar, researchers think that it may have been headed for Germany, which had a population at the time that favored sweeter wines. Chemical analysis revealed that the champagne was stored in wooden barrels, and that the makers added grape syrup into the champagne–an usual practice nowadays.

Because the shipment survived so well in the water, winemakers are interested in seeing if storing and aging wine in deep, cold waters like the Baltic might be a good strategy. Last year, Veuve Cliquot began its own experiments sending several bottles to the bottom of the sea–on purpose this time. By storing some bottles in the Baltic, near where the shipwrecked wines were found, and some in their cellars, the company hopes to see if the loss 170 years ago might have inadvertently led to a whole new way of aging champagne today.