Russian special forces may get a robot tanklet 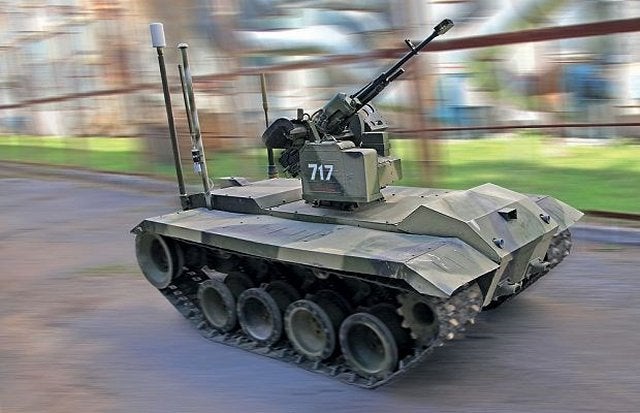 This is the turreted version of the robot. A new model will carry explosives instead, for a one-use delivery. TASS
SHARE

A battlefield is a terrible place for a person. War, as a profoundly human endeavor, requires humans, and there is no way around fighting most wars without, at some point, putting humans on the ground. In the future and, increasingly, the present, those humans will be accompanied by robots, often remotely guided machines carrying some share of the burden of the fight. Or, in the case of gun-toting robots like Russia’s Nerekhta, the robot will actually be firing a weapon.

The gun on the back is operated remotely, with a human picking targets. But a new version of the robot, reported in Russia’s Izvestia daily, will swap the turret for a one-time payload, turning the roving robot into a one-use bomb. The robot, around 600 pounds and just over 3 feet long, is powered by an electric motor and can go as fast as 7 mph while carrying hundreds of pounds of explosives.

As described at Army Recognition:

In essence, the robot becomes a sort of cruise missile on treads, with the autonomy to move toward a pre-programmed target selected by humans. It’s not a new kind of autonomy, but putting it on a ground vehicle is still rare in the world of war. And even after the Nerekhta is introduced, it will be confined to special forces and scouts, kept on the edge of battles.