Say, is this house bugged? 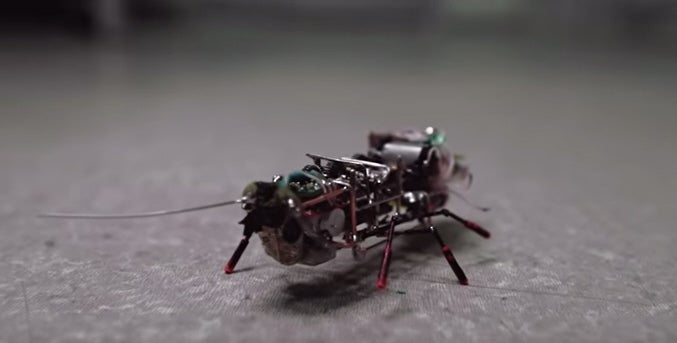 The secret roach’s name was Death’s Head, aka Blaberus Cranifer, and it came from Russia on a mission. It is a small, mechanical beast, styled after the death’s head cockroach. According to Russian state-owned Sputnik news site, it was built in seven months by a group at the Immanuel Kant Baltic Federal University, for a vague Russian organization. That vague group’s requirements? “It should be externally similar to a cockroach, it must have the physical size of a [very large] cockroach and it should have the behavior pattern as close to a living cockroach as possible.” Here’s what that looks like:

Besides floundering on its back, the roach can run, and it sports a surprisingly well-designed ovoid body shield.

The roach has a 20-minute battery life, and according to Sputnik, “The robot can carry up to a 10-gram payload making it of interest to the military, as a miniature robot with a portable camera can penetrate into hard-to-reach places.”

It’s certainly an impressive machine, but it’s hard to imagine it was designed from scratch (well, with a head start from nature) and built entirely in 7 months. We’ve seen round backs on robotic roaches in research from the University of California at Berkeley. Other projects have put remote controls onto the backs of living roaches, and made kits for Kickstarter backers to do the same. Scientists have even launched robot birds from fast-sprinting robot roaches.

None of this is to diminish the work done by the team that built Blaberus, which you can see in action below: