For a closer look at how the Hawk-Eye works, launch the photo gallery by clicking ‘View Photos’ at left.

Its accuracy may be based on a complex computer-generated algorithm, but the Hawk-Eye Tennis Officiating System is ratcheting up the human drama at this year’s U.S. Open. Rather than simply relying on officials to make line calls, the entire crowd now acts as referee, hollering “Challenge!” after controversial judgements. If the player chooses to consult the replay (each player is allowed two challenges per set), an animated image of the ball hitting the court zooms into focus on giant screens around the stadium. The effect is so entertaining that tennis officials have actually asked the Hawk-Eye technicians to delay showing instant replays for a few extra seconds to allow suspense and excitement to build.

Developed by English artificial-intelligence expert and entrepreneur Paul Hawkins, the new instant-replay system brings an unprecedented level of accuracy to a game in which the players are bigger, stronger, fitter and quicker, hitting the ball faster than ever and making line calls almost impossible for humans to make. But this is where the Hawk-Eye excels. A series of high-speed cameras surrounds the court and tracks the trajectory of the ball using a system Hawkins first developed for the game closest to his heart, cricket.

“It was an easy fit for cricket, but I always knew this technology was perfect for tennis,” says the soft-spoken Brit. Before it was adopted for use at this year’s Open, the International Tennis Federation exhaustively tested the Hawk-Eye’s ball-tracking capabilities in the lab and at tournaments. Over the course of many rigorous trials, the Hawk-Eye technology was honed to make definitive calls in less than three seconds with zero errors.

At the early test tournaments, most players were incredulous, but competitors like top American James Blake quickly warmed to Hawk-Eye’s speed and unfailing accuracy. “With instant replay, we can take advantage of the technology and eliminate human error,” Blake said. “And having just a few challenges will make it both fun and dramatic for the fans at the same time.” 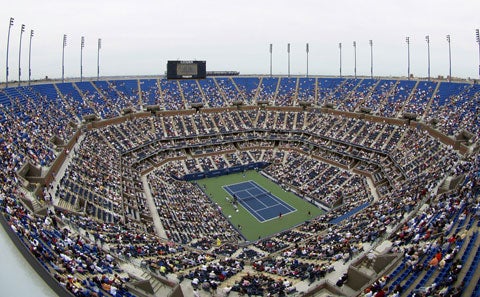 The USTA’s Arthur Ashe and Louis Armstrong stadium courts [Ashe shown here] are ringed with 10 high-speed cameras that individually capture the position of the ball at 50 frames per second during each shot. Each camera’s computer then calculates the exact center of the ball in each frame and feeds that two-dimensional information to a mainframe in a control room situated high above the court. In a split second, that information is converted into a three-dimensional view of the trajectory of the ball and exactly where it landed. If a player challenges a call, the trajectory and landing point are simultaneously transmitted to the umpire´s chair, the high-definition screens at either end of the stadium, and the television feed. So far, during the first week of play at the U.S. Open, players have been successful in just one third of the 102 challenges. 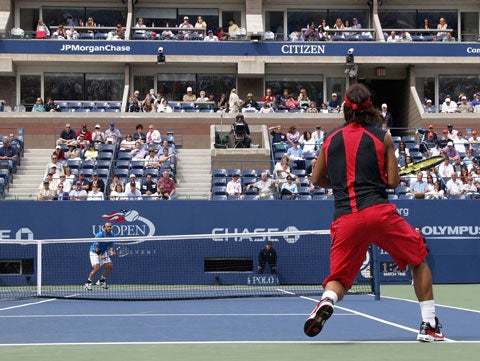 Second-seeded Spaniard Rafael Nadal returns Peruvian Luis Horna’s serve in the second round of men’s singles competition below the watchful eyes of two of the 10 cameras ringing the court on Arthur Ashe Stadium [shown to the right of the JPMorganChase and Citizen logos]. 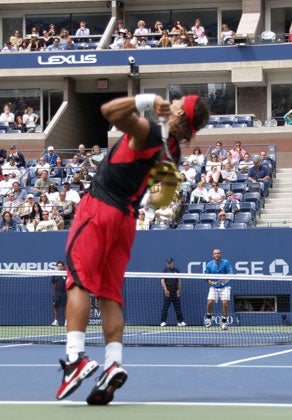 Hit It and Quit It

Cameras [shown just to the right of the Lexus logo] sit exactly 28.5 feet above the surface of the court. During each match, players are afforded two “challenges” each set and can challenge only a point-ending call. If a player’s challenge is unsuccessful, he loses one challenge opportunity. 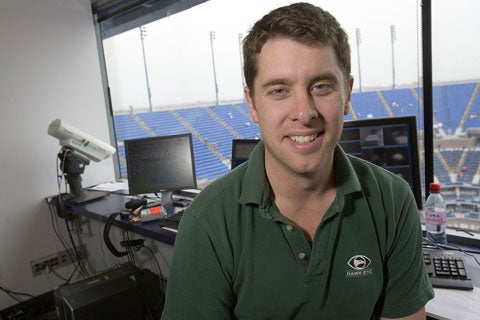 Hawk-Eye inventor Paul Hawkins sits in front of three of the seven computer screens and one of the Hawk-Eye high-speed cameras perched over Arthur Ashe Stadium. Implementation of the first truly instantaneous instant-replay system in sports will cost the USTA approximately $300,000 this year. 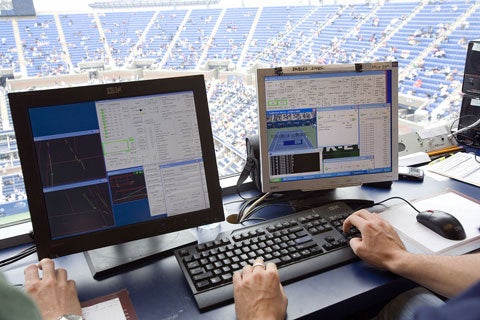 From the control room, one of Hawkins’s technicians oversees the 10-camera data-crunching on the left screen while the ball’s three-dimensional trajectory and landing point are shown on the right-hand screen.
Robots