Return of the Bodacious ‘Bots

Our Sex Files columnist details how sci-fi writers, artists and engineers represent women. Final verdict? "I, for one, welcome our new fembot overlords!" 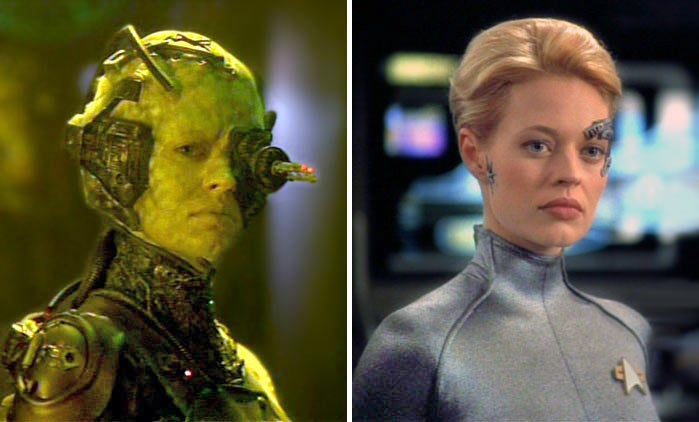 Added to the_ Star Trek: Voyager_ cast to sex up the show, Seven of Nine is half-Borg, half-human, and all woman. Eighteen years with the Collective clearly does wonders for your figure.
SHARE

It’s the ultimate geek fantasy: a metal-and-plastic woman of your own, brought alive by technology (the geek’s own stock-in-trade), who somehow becomes hopelessly devoted to you. In both science and science fiction, the creation of female robots has tended to revolve around a housekeeper-whore dichotomy: the fembot is either a docile domestic helper, or a sexually uncontrolled, well, sex machine. Historically, she has simultaneously embodied men’s deep desire for idealized domestic companionship and their fears of being destroyed by unbridled female sexuality.

Later, in the seminal 1985 “A Cyborg Manifesto,” the fembot was co-opted by the feminist scientist Donna Haraway, who memorably declared, “I’d rather be a cyborg than a goddess.” Without the constraints of organic life, the female robot is not shackled to the tyranny of the reproductive cycle; she becomes a metaphor for female power, paradoxically more potent because it is barren. It’s no coincidence that “fembot” has recently become a widespread epithet for hard-core feminists.

Either way, from Pygmalion to Bride of Frankenstein, fembots (and fembots run amok) have been part of our imagination for hundreds of years. Inspired by Julie Wosk’s recent lecture and new book (in which many of the gallery’s images can be found), Alluring Androids, Robot Women, and Electronic Eves (not to mention the original “Fembot Mystique“) I decided to take a look at a few of the most memorable and what they tell us about ourselves. 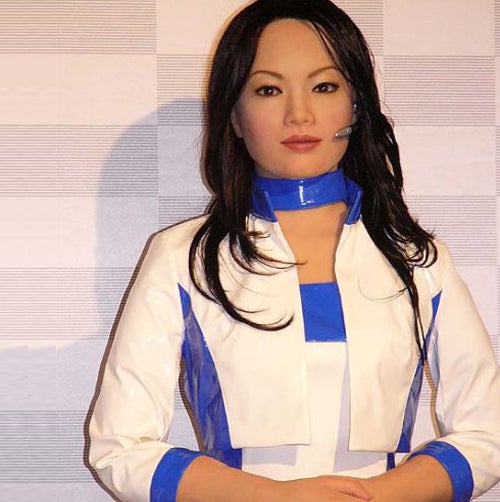 This extraordinary lifelike female robot (developed as an even more lifelike version of the already-extremely-lifelike Repliee Q1) has over 30 points of articulation in her upper body. Sensors embedded in her silicone skin let her know when she’s being touched; her pre-programmed response to a tap on the back is, “Hey, what’s your problem?!” Despite the humaniod features, though, Repliee is still sitting pretty squarely in the uncanny valley; just looking at her gives me the heebie jeebies.

She’s bald. She’s beautiful. She’s amply bosomed and buttocked. And she’s part of what ad blogger Copyranter calls “the most asinine liquor advertising [campaign] in history.” Still, this pseudo-feminist (she declared her candidacy for president this spring) gynoid helped Svedka raise sales by 60 percent the year after she was introduced.

Added to the_ Star Trek: Voyager_ cast to sex up the show, Seven of Nine is half-Borg, half-human, and all woman. Eighteen years with the Collective clearly does wonders for your figure. 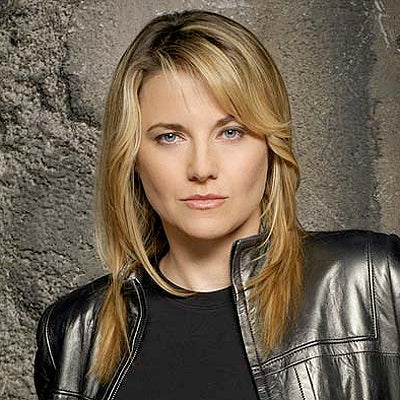 Why does Number Six seem to get all the attention? OK, we know why, but who wasn’t devastated when the whole line of Threes was boxed over for half a season? Not only is the Battlestar Galactica humanoid played by the stunning Lucy Lawless, of_ Xena: Warrior Princess_ fame, but she’s a pretty sultry Cylon in her own right. 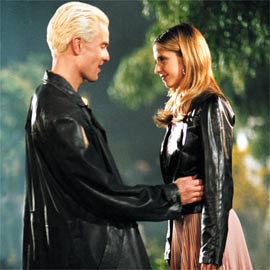 Like other fembots before her, Buffybot is a replica of the series’s protagonist, identical but endowed with considerably more lust. Created as a sex toy for the charismatic vampire Spike, Buffybot eventually takes on a life of her own. With a little programming help from Willow, Buffy and her cohorts use the bot as a tool to confound their enemies. She even keeps Sunnydale in line when Buffy takes a short break from the world of the living. 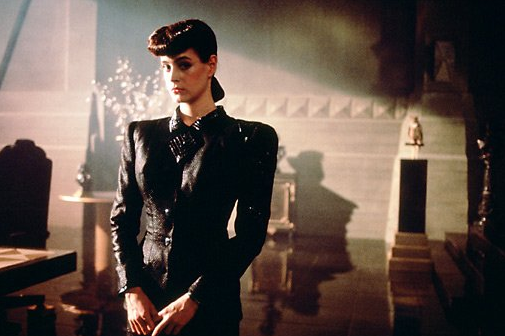 The saddest fembot of all. Rachael, from Bladerunner, is a secretary in the employ of the Tyrell Corporation. She’s got big, brown eyes, a flair for retro fashion and a cigarette permanently welded between her first two fingers. Her slow realization that she is merely Tyrell’s latest model, a top-of-the-line Nexus 6 Replicant implanted with the childhood memories of his niece, drives her to despair . . . and into the arms of Deckard, Harrison Ford’s world-weary replicant hunter. 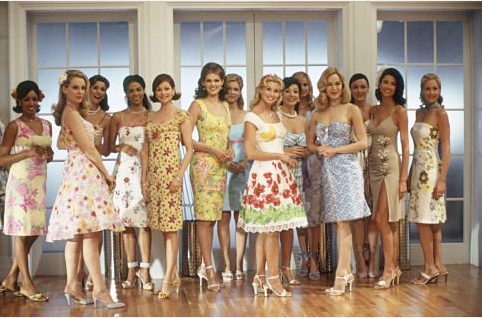 The eponymous wives of the 1972 book-cum-1975 movie-cum-2004 remake spawned a legion of imitators by giving terrifying voice to social anxieties about the woman’s liberation movement. The men of Stepford, Connecticut, fearing that their high-achieving wives were getting the upper hand, responded by turning them into washing (and drying, and ironing and baby-making) machines. Julie Wosk writes of the Stepford Wives in her book (page 15), “The remote-controlled android-wives are in love with their roles as homemakers and always want to look their best. Even at their simply Stepford Day Spa aerobics classes, they wear sexy sundresses and high heels.” 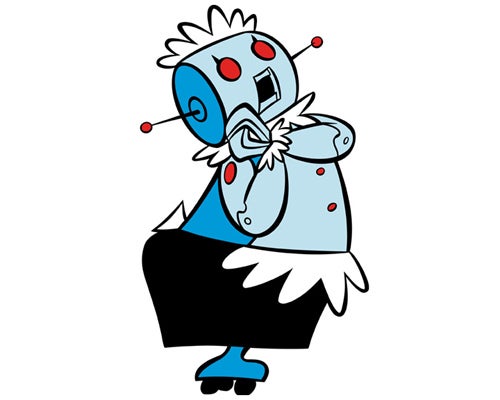 On the domestic-sexy spectrum of female androids, Rosie falls to the far, far left. Plump and bustling, she isn’t much more than a jumble of metal parts topped with a frilly apron, but she keeps the Jetson household running as smoothly and efficiently as her own innards. 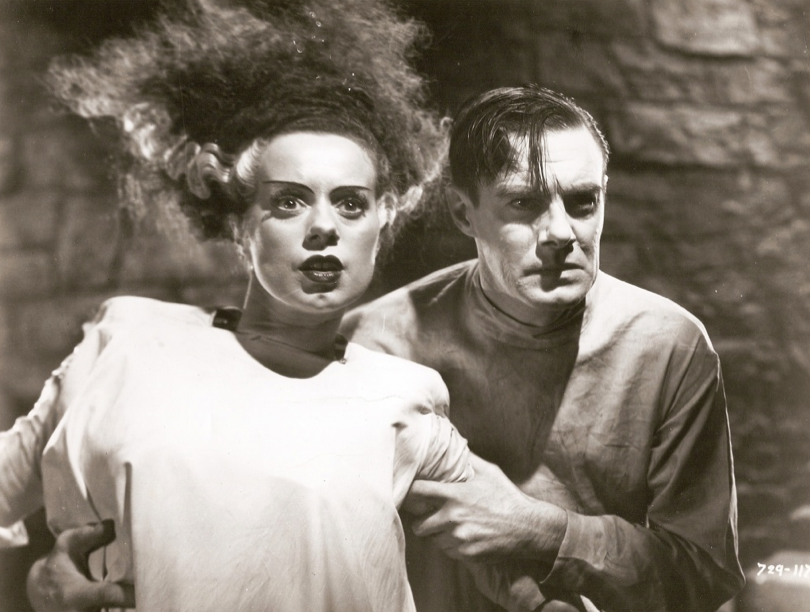 She was a sultry corpse with bee-stung lips and an iconic streak of white in her hair. Brought to life in Dr. Pretorius’s lab one night to be a docile helpmeet for Frankenstein, the Bride-to-be instead went rogue, shrieking at the sight of her betrothed’s patchwork quilt of a face. The sensitive monster proceeded to destroy the laboratory building with her (and himself) in it. Like Mary Shelley’s original novel, this film betrays a profound ambivalence about the destructive capacity of “creative” technology. Wosk, in her book, writes (page 40) “James Whale’s film used elaborate special effects to depict the creation of a woman who was designed to offer comfort but produces anguish instead.” 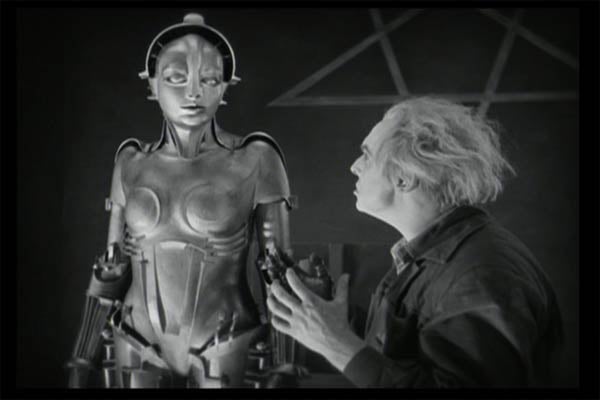 This still from Fritz Lang’s classic urban nightmare Metropolis depicts the robotic alter ego of the angelic Maria, a pseudo-Christian reformer whose efforts to evangelize the city’s cog-like workers infuriates their autocratic ruler, Joh. The new Maria, built by Rotwang (at right) on Joh’s orders, is an exotic dancing sex fiend who, despite her debasement, manages to foment revolution even more effectively than before. Who’d have thought that the proletariat would prefer sex to god if allowed to choose their opiate? 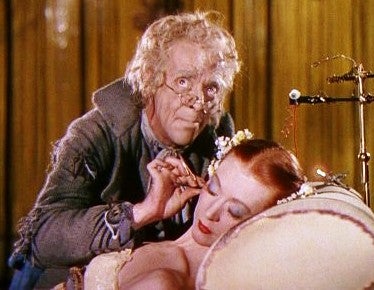 In the 1951 film, _The Tales of Hoffmann _(based on the short stories of E.T.A. Hoffman) the author himself is a key character. With the aid of a pair of magic glasses, he falls in love with Olympia, a beautiful automaton created by the evil scientist Coppelius, who is eventually torn apart in front of his eyes in a devastating, humiliating set piece. Olympia can be seen as a harbinger of the end of the age of innocence in science. The lady musicians of the eighteenth century were nothing more than charming novelties. Coppelius’s creation is equally marvelous, but imbued with a sense of danger and portent. Julie Wosk on The Tales Of Hoffmann (page 26): “Female automatons could be associated with the macabre. In the story “The Sandman” (1817) by German writer E.T.A. Hoffmann, Nathanael falls passionately in love with the beautiful Olympia who is actually a mechanical young woman created by Coppelius and Spalanzani [sic]. He dances with her and is enchanted by her but later watches in horror as the two men fight over her, twisting her body until her eyes fall out on the ground.” 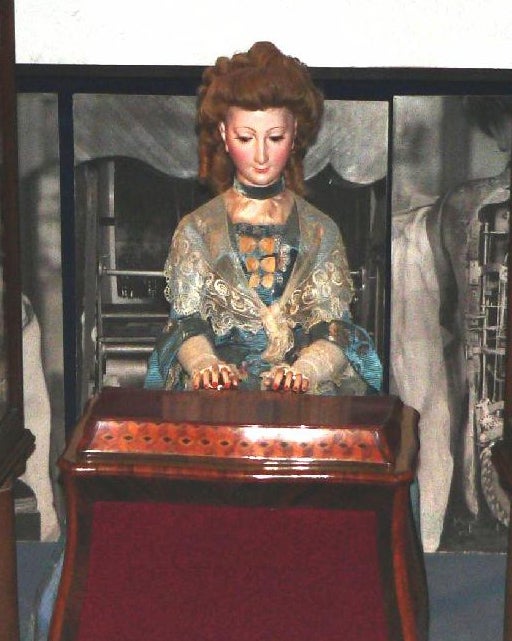 This prettily begowned automaton can breathe, blink, play the harpsichord, and even take a bow when she’s finished with her song. She runs like clockwork because her viscera are clockwork: she was a product of the imaginations and deft hands of virtuosic Swiss clockmakers Pierre and Henri-Louis Jaquet-Droz. 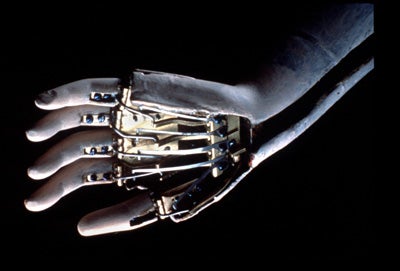 Wosk’s book features this ultra-rare close-up of the automaton’s fingers. Here’s what she has to say about the technology behind this music-maker (page 22): “Unlike other mechanical automatons that simply look like they are playing, the fingers of the Jaquet-Droz Lady Musician actually do the playing. Her fingers are driven by two cylinders with pegs (similar to the cylinders in a music box) contained in her torso. The pegs move a complex set of levers that are connected through her arms to her fingers, causing them to press the keys on the organ which produces musical notes.” 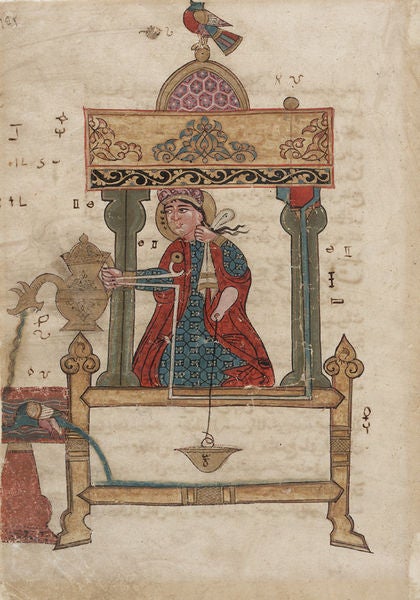 The Da Vinci of the Islamic golden age, Al-Jazari was a talented mechanical engineer whose technical prowess was matched only by his sense of whimsy. Along with the crankshaft and the suction pump, he invented a pantheon of hydropowered automata, including this lovely hand washer. Not only is she obedient, cheerful, thrifty, brave and clean, but the flush mechanism Al-Jazari created for her basin is still used in toilets today.
Robots
blade runner
Cars
fembots
movies
sex