De-bearded mussels are not only delicious — soon, they might improve medical implants. Scientists can now reproduce the sticky gloop... 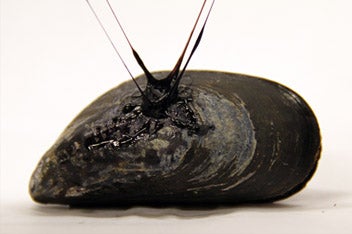 De-bearded mussels are not only delicious — soon, they might improve medical implants. Scientists can now reproduce the sticky gloop that mussels use to anchor themselves to rocks, leading to a new breed of self-healing, waterproof elastic adhesives that can be used for underwater materials or even for biomedical applications.

To hang onto rocks in crashing ocean surf or tidal pools, mussels secrete hair-thin fibers called byssal threads — that’s the “beard” that must be removed before you can eat them. The threads act as an insoluble adhesive.

Scientists have learned a lot about mussel fiber stickiness in the past several years; in 2006, scientists figured out which amino acid was involved in producing the stuff, and last year, researchers in Germany explained the chemical bonds present in the byssal threads. Now chemists at the University of Chicago have made a synthetic version.

Chemistry professor Ka Yee Lee and several postdocs came up with a polymer-based version, which they say resembles Silly Putty, according to a University of Chicago press release. It starts out with a polymer mixed with metal salts at a low pH, resulting in a green solution. Then the solution is doped with sodium hydroxide to give it a high pH, and it turns into a red, self-healing gel. Changing the metal ions involved changes the material’s properties, Lee said.

In nature, mussels also use a two-step process — the mussel produces a foam and extrudes it as thin threads, and then adds a protein coating that turns the material into an adhesive.

Lee et. al have applied for a patent for their synthetic byssal threads, and believe they could be valuable for underwater use or for the medical device industry, as a bonding agent for implants or as an adhesive. The work is reported this week in the Proceedings of the National Academy of Sciences.