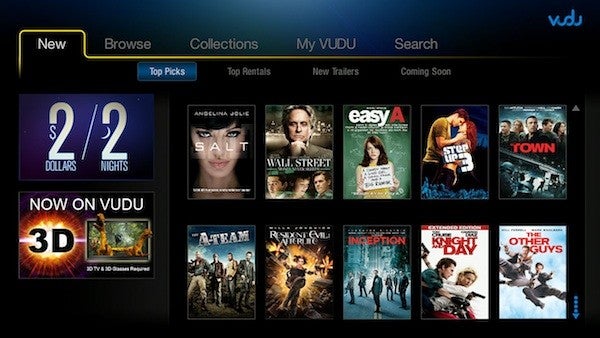 The last few years have been high on 3-D hype and low on 3-D substance. Seemingly every hardware maker, whether they’re making giant HDTVs or minuscule smartphones, has stuffed 3-D tech into their gadgets, but there’s hardly any actual 3-D content out there to watch. That’s starting to change, with major announcements from Sony, ESPN, Vudu, and, yes, Penthouse proving that there might just be some use to 3DTVs beyond Jackass 3D.

The big 3-D content announcement from this year’s CES came at Sony’s press conference. The company is going all-in on 3-D, with TVs, cameras, and camcorders all boasting 3-D capabilities, so it only makes sense for the company to provide some way for owners of all that equipment to actually watch 3-D content. The tech giant is partnering with Discovery and IMAX, two other 3-D pioneers, to create 3DNet, a 24-hour 3-D network that will carry 3-D content from all three.

Sony has major resources in content, owning Sony Pictures as well as Sony Music, and indeed showed off a clip from the upcoming The Green Hornet in 3-D (preview: it looks surprisingly awesome). Sony will be providing movie and television content, as well as, intriguingly, “music- and game-related 3-D content.” Discovery is granting rights to its legion of TV networks and the 3-D content emanating therefrom, and IMAX will also grant the television rights of its 3-D movie content. The channel might end up being a bit of a hodgepodge, but in the currently barren world of 3-D content, a do-everything channel isn’t the worst idea.

It’s only surprising that it took this long, really: Penthouse announced that they will be the first, um, adult company (in the States, at least) to launch a 3-D channel, to be called Penthouse 3D. CEO Marc Bell says they began shooting in native 3-D “last summer,” and is excited to keep expanding the use of the technology. Penthouse 3D will join the similarly groundbreaking Penthouse HD when it launches sometime in the second quarter of 2011.

ESPN 3D actually launched back in June, but only broadcasts occasionally now, mostly for big events like the World Cup. But sports programming is one of the few areas where 3-D is almost inarguably warranted–cinemaphiles will debate (and, often, hate) the introduction of 3-D in their art form, but the immediacy of sports broadcasts really lends itself to 3-D. ESPN, realizing the potential, is finally expanding ESPN 3D to a full-time, 24-hour broadcast, starting on February 14th (there’s nothing more romantic than watching hockey players slammed against the glass in full 3-D, right?).

The network will still be rerunning most of its content, since there simply isn’t enough 3-D footage out there to run nonstop (though I’m sure we’re all anxiously awaiting SportsCenter 3-D). The first focus will be on basketball, with several games already scheduled in 3-D.

Vudu’s streaming movie service may not be as ubiquitous as Netflix’s, but for spanking new releases, Vudu’s the way to go. Vudu’s available on nearly as many devices, too, including lots of Blu-ray players, connected TVs, the PlayStation 3, and media streamers like Boxee. Now Vudu’s got a step up on Netflix, as they’re the first to bring streaming 3-D movie content directly to your TV.

It’s still early for streamed video to be available in 3-D–it requires much more bandwidth to stream in the same quality as a 2-D movie, and low-quality 3-D looks pretty much like a migraine feels, but Vudu is confident that they’ll be able to keep the quality high. The first titles will be Bolt, Meet the Robinsons, and Chicken Little, and they’ll be available next week. 3-D movies will cost $1 extra to rent and $2 extra to buy over the equivalent 2-D title, which is pretty generous compared to the high cost of physical 3-D movies.