This squishy little robot can lift 1,000 times its own weight

Sometimes being soft is an advantage. 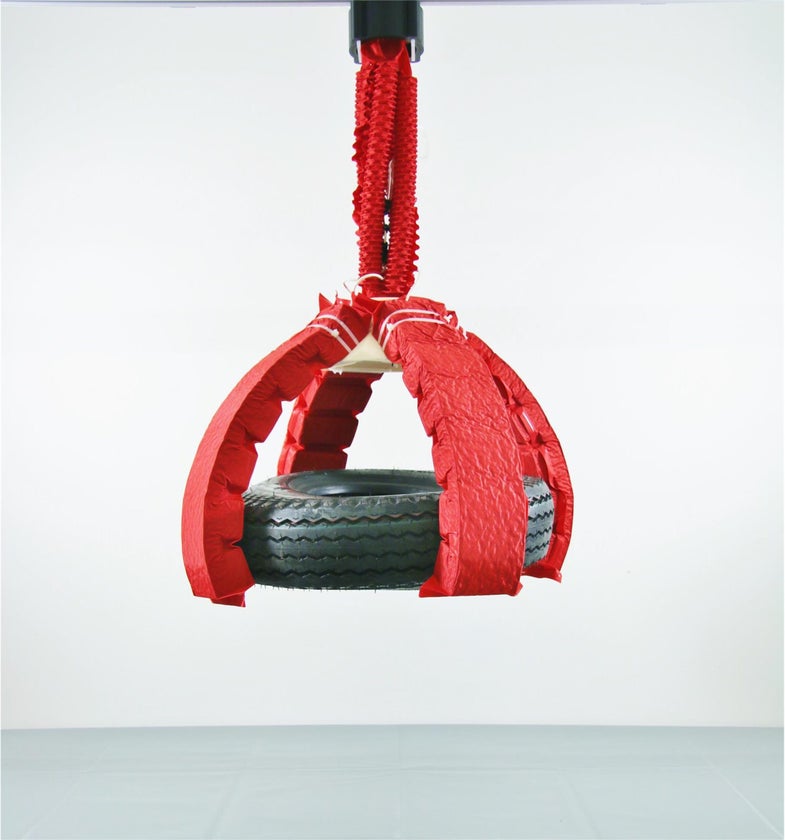 Our future robotic overlords may have a gentle—but firm—touch. Researchers from Harvard and MIT have created a soft robot with origami-inspired muscles capable of hoisting incredibly heavy loads.

There are plenty of good reasons to make your robot a squishy one. So-called soft robots are perfectly suited for squeezing into the tight spaces one might expect in a search-and-rescue scenario after a disaster. They’re also more impervious to damage than traditional bots made of hard materials, which are liable to shatter under too much force. And perhaps most importantly, they’re ideal for interacting with humans. A robot made only of yielding, soft material won’t accidentally puncture your heart muscle during surgery, nor will it cut you open as it scrambles to find you in a pile of rubble.

But there’s at least one good reason to make a robot out of harder stuff. It’s much more difficult to create a mechanoid with a strong grip if you’re using soft materials. Just imagine trying to pick something up without a single bone in your hand. First of all, ew? Second of all, you’d have a tough time of it.

Still, one does not need bones in order to grab things. Consider invertebrates like the noble octopus: this creature’s eight legs have nary a bone in sight, but they can manipulate their muscles in such a way as to move them without skeletal support. Even in animals that do have skeletons, some structures do without. Take tongues, for example, or elephant trunks. So engineers know that the proper workaround must exist.

A study published this week in the Proceedings of the National Academy of Sciences presents a potential solution. By creating a flexible “skeleton” (don’t worry, it’s still relatively squishable) inspired by origami, researchers were able to make robots that can lift 1,000 times their own weight. They didn’t have to sacrifice the benefits of soft robots, either. While a 2.6-gram muscle could lift a 3-kilogram object, it could also grasp a flower without crushing the delicate blossom.

The inner skeleton can actually be made from a variety of cheap materials. The engineers folded up pieces of soft silicone rubber, for instance, as well as sheets of clear polyester. They even conducted successful tests with water-soluble materials, which could be used to make medical or environmental robots capable of dissolving in-situ when finished with their work. In a robot where total squishiness is not of the utmost concern, metal coils could provide extra strength, or the skeleton could be made of electronic boards to allow for screens or color changes. Depending on the material, the researchers note, any manner of fabrication technique—3D printing, machining, casting, forming, and even manual folding—might be used.

The skeleton goes into a bag filled with air or fluid (like the skeleton, the skin can be made of all sorts of materials), creating a single muscle. Then, vacuum suction causes the outer skin to collapse or expand, prompting the inner skeleton to unfurl or contract based on its “programming,” or the way engineers folded it. A simple accordion fold enables up and down movements, but other patterns could prompt the muscles to curl up when squeezed, or to twist into a circular gripping mechanism. The team calls the resulting structure a fluid-driven origami-inspired artificial muscle (FOAM).

“One of the key aspects of these muscles is that they’re programmable, in the sense that designing how the skeleton folds defines how the whole structure moves. You essentially get that motion for free, without the need for a control system,” first author Shuguang Li, a Postdoctoral Fellow at the Wyss Institute and MIT CSAIL, said in a statement. That simple, physical programming cuts down on how smart a robot’s brain needs to be by dictating various movements based on air flow alone.

“The possibilities really are limitless,” Daniela Rus, the Andrew and Erna Viterbi Professor of Electrical Engineering and Computer Science at MIT and one of the senior authors of the paper, said in a statement. “But the very next thing I would like to build with these muscles is an elephant robot with a trunk that can manipulate the world in ways that are as flexible and powerful as you see in real elephants.”