The scientifically best way to sweep a floor 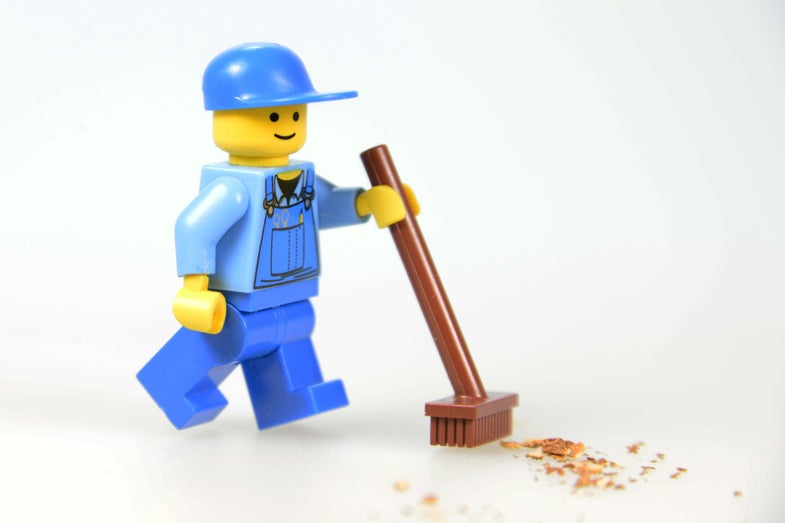 Congratulations! So, you’ve decided to become a better sweeper. Your timing couldn’t be better—spring officially began this morning, which makes it a great time to get rid of those winter dust bunnies. And reading this article is your first step towards having cleaner floors. To find the scientifically best way to wield a broom, we spoke with two cleaning experts.

If you don’t really enjoy cleaning, don’t worry. You have an ally in Melissa Maker, the Toronto-based founder of a boutique cleaning company called Clean My Space.

“I don’t love cleaning,” she says. “I hate it.” In order to spend less time cleaning, her philosophy emphasizes doing tasks with efficiency.

Here are Maker’s thoughts on the best way to sweep. (She has more information in her newly-released book, Clean My Space: The Secret to Cleaning Better, Faster, and Loving Your Home Every Day.)

Step one: Get a good broom, and make sure it’s clean and in nice shape. “The idea is the bristles should be one-directional,” she says. In other words, if your broom’s bristles are all askew, like a porcupine on a bad hair day, consider investing in a new sweeper. Maker recommends the O-Cedar Angler Angle Broom, because she likes its quality, shape, and that its head can be unscrewed and removed for easier cleaning.

Step two: Have a strategic plan. The idea is to work your way from one part of the room towards the exit. Don’t sweep yourself into a corner—do the opposite!

Step three: Divide and conquer by breaking the room up into smaller sections, and then sweep each one using “fairly short deliberate strokes,” she says. Deal with each pile of dirt you create by sweeping it into a dustpan within that section—don’t try to move that pile all around! As for that “dreaded line of dirt” that the pan always seems to leave behind—which Maker refers to as “crazy-making,” and we don’t blame her—she recommends dealing with it using a damp paper towel.

Step four: There is no step four! You’re done. Just don’t forget to keep your broom clean. Maker recommends washing it with soap and water in a sink, using a sink strainer to keep the crud from clogging up your pipes.

Cassandra Aarssen, a blogger, author, and YouTuber, takes an approach similar to Maker’s: a “smarter, not harder” philosophy.

She echoes Maker’s idea of breaking the room into smaller sections: specifically, four of them.

“A lot of people will sweep into the middle of a room,” she says. “It’s just too long of a distance. Even in a small room, you’re dragging those dust particles.”

Sweep into the middle of each quadrant, and deal with each pile at a time. She recommends a brand of broom made by Velida, like this dustpan and brush combo.

Once you’ve swept up the most obtrusive crumbs, hairs, and dust clumps, Aarssen suggests doing a wet mop to get rid of the smallest dust particles; she calls it “wet dusting.” Aarssen likes using a device called the Rubbermaid Reveal Spray Mop, and points out that Velida manufactures a spray mop, too. Doing that can “really eliminate all those little dust and hair particles,” she says.

Ultimately, a good clean sweep with a broom followed by a Swiffer-like wet mopping is a nice one-two punch to get your floors nice and sparkly.

But Aarssen has a confession: For the sweeping portion of her method, she prefers robots to brooms. She loves Roombas, those helpful robots that will do your vacuuming for you. (And on a personal note, I really like my Roomba too, a mechanical servant that keeps my floors clean and gives me something to tinker with. I even like cleaning the thing.)

“If you can use tech, or if you can use any type of robot to do the floor,” Aarssen says, “that is the way to go.”